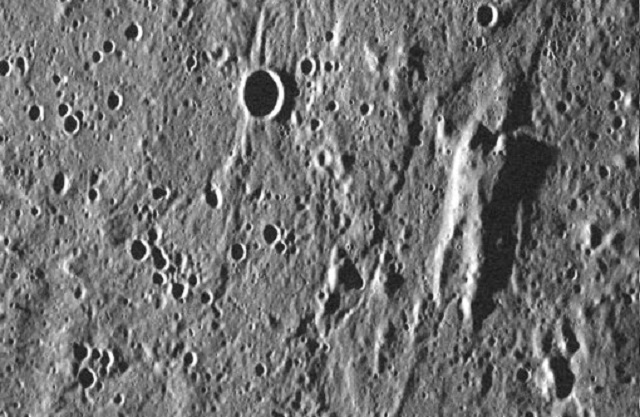 Don’t buy into the conspiracy, Star Wars isn’t a movie – it’s a true story! You might think I’m crazy, but we now have proof. A human-like figure has been spotted on the surface of Mercury, which clearly must be a re-frozen Han Solo. No doubt about it.

Joking aside, the image really does somewhat resemble frozen Han Solo, as seen in Return of the Jedi.

“A portion of the terrain surrounding the northern margin of the Caloris basin hosts an elevated block in the shape of a certain carbonite-encased smuggler who can make the Kessel Run in less than 12 parsecs,” writes one of the scientists involved in first discovering the image, which was taken by the orbiting Messenger spacecraft.

In reality, the pictured ‘human figure’ in the photo may simply be a part of the original surface of Mercury that pre-dates the formation of Caloris.

“If there are two things you should remember, it’s not to cross a Hutt, and that Mercury’s surface can throw up all kinds of surprises. This block may be part of the original surface that pre-dates the formation of Caloris, which was shaped by material ejected during the basin-forming event,” concludes the researchers involved with finding/studying the photo.

For those wondering when the picture was taken, it was actually way back in 2011, though the image has just now been revealed to the public.