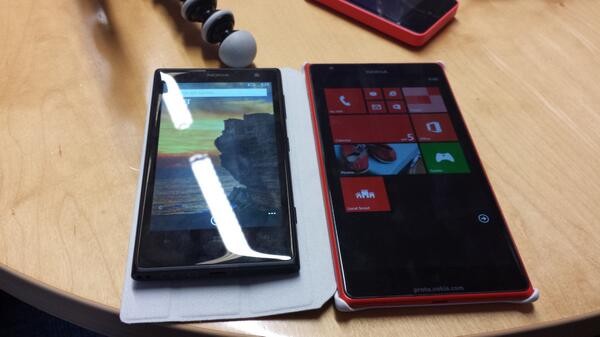 Microsoft laid out some very specific requirements for the the Windows Phone platform and what this has meant is that manufacturers like Nokia haven’t had much flexibility in terms of choosing a screen size. These specs are being adjusted for the next update (Windows Phone 8 GDR3), allowing for bigger, higher resolution displays. And Nokia is fully prepared to take advantage of these changes.

The much larger Nokia Lumia 1520 is expected to be officially revealed to the world on September 26th, proudly showing off its much larger 6-inch 1080p display that would effectively put it in the same league as something like the Android-powered Samsung Galaxy Note 3. Nokia isn’t pulling any punches, as this is going to be one powerful handset. You’ll get a Snapdragon 800 CPU, 32GB internal storage, microSD expansion, four microphones for Rich Audio Recording and a 20MP PureView camera to go along with that full HD display.

Of course, when you have that big of a display and that much horsepower under the hood, you’d better hope that you have a battery that can last more than a couple hours. In that regard, the Nokia Lumia 1520 looks like it will be at the top of its class with a 3400mAh battery. Compare that to the 3200mAh and 3140mAh batteries you get with the Galaxy Note 3 and the LG Optimus G Pro, respectively.

In related news, the so-called Nokia “Sirius” Windows 8.1 RT tablet should be heading to AT&T in early November at around the $499 price point. It gets a 2.15GHz quad-core Qualcomm 8974 chip, 10.1-inch 1080p IPS display, LTE, and a Zeiss 6.7MP camera. AT&T gets a limited exclusive before the Windows tablet heads over to Verizon.