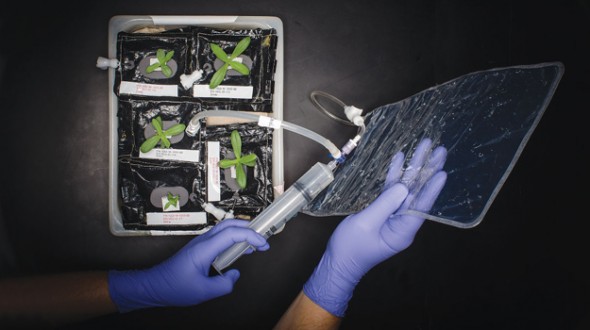 Later this year, NASA astronauts aboard the ISS have a new duty: attending to a mini-garden of romaine lettuce. That’s one small step for lettuce, one giant leap for vegetation kind!

The idea is that the lettuce will be grown in zero-gravity under pink LED lights, and it is believed the lettuce should be big enough for eating within 28 days. Of course the first batch won’t end up as space salad, and will instead be frozen. After that, it will be sent back to Earth for testing to ensure that the veggies are truly safe for consumption.

So how exactly will the lettuce be grown? The Vegetable Production System uses small kevlar pouches that contain a special growth medium. This isn’t exactly your everyday planting method, though it’s actually more efficient.
For what it’s worth, we already know that the planters work just fine here on Earth, now the next step is to see if they really work in space, too. If all goes as planned, ISS could eventually see a whole variety of leafy veggies make their way into orbit.

This is certainly a fascinating development, and one that has a ton of potential going forward. What do you think? Share your thoughts below!