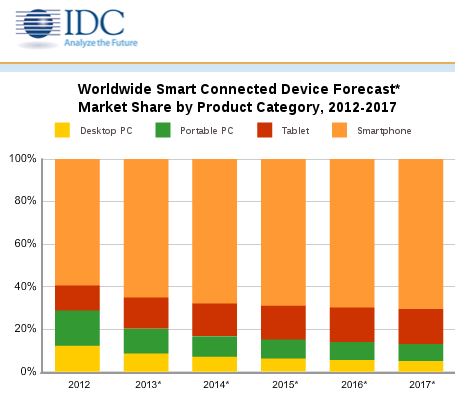 It’s no secret. Ask just about any average Joe or Jane consumer about the kind of electronics that they buy and it is far more likely that they’ll say they are buying (or want to buy) a new smartphone or a new tablet this year than they are to say that they’re shopping for a new desktop or notebook PC. More people lust after the Samsung Galaxy S4 or a new iPad than they do over some laptop. It’s just the way things have become.

And now sales figures are starting to reflect that. Indeed, the analyzing gurus at IDC have put together their market forecast for the fourth quarter of this year and they’re predicting that more tablets will be shipped in that period than PCs. And that “PC” segment includes both desktop computers and what they call “portable” computers. I’ll just assume that means notebooks and hybrids.

While the increasing popular of the mobile lifestyle is certainly a part of that, I think another part of that is that desktops in particular (and notebooks too) can be upgraded far more easily than our smartphones and our tablets. If you want a faster desktop PC, all it might take is popping in some more RAM or swapping that HDD out for an SSD. You typically can’t do that with your tablet, so when it gets too slow, you might just go buy a new Nexus 7 instead.

IDC says that PCs will still outship tablets for the 2013 calendar year, but the trend is definitely moving toward the opposite. IDC lowered its outlook for PCs by 10% for the year and, by the end of 2015, tablets will be outshipping total PCs on an annual basis. Of course, as “phablets” gain in popularity with their 5+ inch displays, we may see less popularity among smaller 7-8 inch tablets. Even so, at the end of the day, it looks like conventional PCs are still necessary, but definitely losing market share overall.