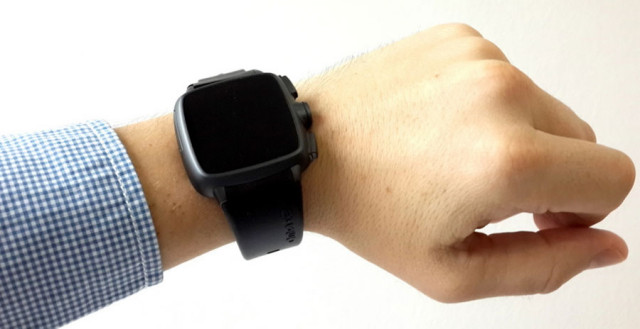 The Omate TrueSmart is a smartwatch currently raising funds over at Kickstarter. The watch is so popular that they have already raised more than $684,000 ($100,000 was the target) with 9 days to go.

The Omate TrueSmart will arrive with:

The watch can be used with a smartphone or as a fully standalone device. They are saying that TrueSmart will be capable of downloading and installing apps all by itself.

It is said to be coming with Google Play Store support, but that’s where the problem has been spotted by Kevin Barry from TeslaCoil. The smartwatch features a 240x240p display (ldpi: 320x320dp), which is not enough to pass the Play Store’s CTS (Compatibility Test Suite). It should be at least 426x320dp for getting the official Play Store support. Of course, the company can unofficially find ways to run Play Store on the smartwatch, but that would end up making Google mad and could cause additional problems (read: lawsuits?) for the company.

But no one knows what’s happening here. Omate might be ignorant about Google’s rules (or maybe they know about an upcoming change of rules) or the search giant might have given the company permission to add Play Store support to TrueSmart. We will keep you updated on the matter, so stay tuned.

Do you think that Omate will go for unofficial ways to bring Play Store to their device? Will you buy the device if it doesn’t ship with Play Store?