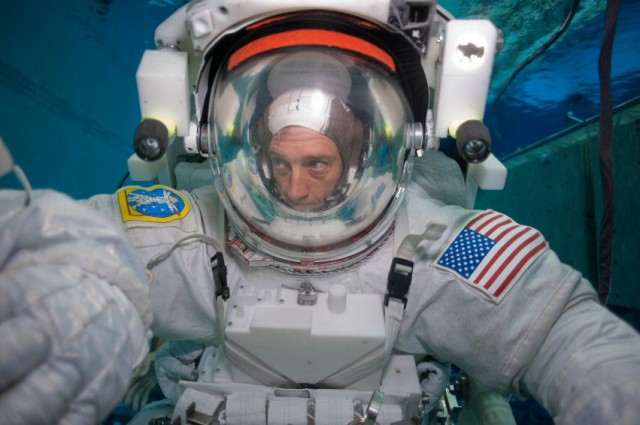 You might already know that Astronauts train for spacewalking at NASA’s big pool, the Neutral Buoyancy Laboratory (NBL) in Houston. This facility accommodates a full-scale mockup of the International Space Station. If you thought that it’s too easy to float around in water in a space suit, you might want to hear what Terry Dunn has to say.

Dunn, a former NBL suit and tool engineer, was given a chance to wear the spacesuit, known at NASA as the EMU—Extravehicular Mobility Unit, and enter the pool for doing several tasks including playing “the role of a distressed and unconscious astronaut” for making sure that the rescue divers got their training.

His story gives us an idea about how difficult it is to get into an EMU, which is not being recommended for claustrophobic people, before getting into the big pool which measures in at 202’ × 102’ × 40’ and has 6.2 million gallons of water in it. And if your eyes do not adjust to the fisheye effect created by the EMU helmet, you might end up getting removed from the pool like Robert Knight who was in the water with Dunn.

Moving from one point on the ISS to another was via handrails, and Dunn says that things were more like “spacecrawling” or “spacestumbling”. And we also get to know about how difficult it is to do different tasks while inside a neutrally buoyant EMU.

Certainly it’s not easy to train to be an astronaut. Check out Terry Dunn’s full story here.