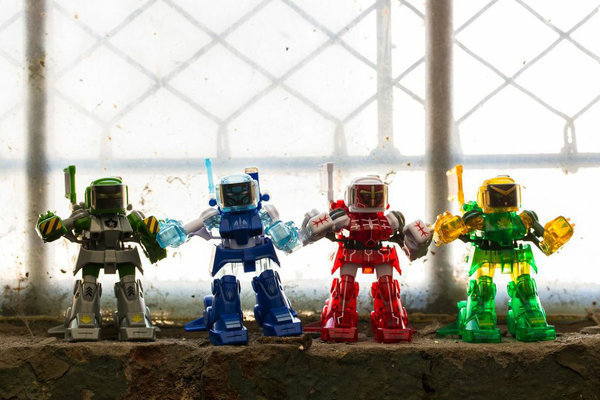 Did you ever play the old Rock ‘Em Sock ‘Em Robots game when you were a kid? Did it bug you at all that your robots couldn’t walk around that tiny ring at all and they didn’t have any cool light-up effects? Do you want to relive your childhood but with some much cooler toys? Your’e in luck.

What you see here are the Battroborgs and they’re basically radio-controlled robots built for the single purpose of engaging in a boxing bout for your amusement. The kit comes with two such bots, along with a boxing ring effectionately known as a “fight arena.” The handheld controllers are simple: you throw a left punch and the Battroborg does that; throw a right punch and the Battroborg does that. To advance, you alternate between lefts and rights. If you want to turn, then you just keep punching with one of the hands to rotate in that direction.

The battle doesn’t go on indefinitely, of course, just like the old Rock ‘Em Sock ‘Em Robots. Instead of the head popping up from the torso, the Battroborgs have a backpack with lights. These indicate the current level of damage and when it starts blinking red, it means that Battroborg is defeated. The loser stops moving until you go ahead and reset everything for another match. This is naturally best enjoyed with a friend, but if you want to play alone, you can set up the second Battroborg on “Auto Drone” mode where your opponent is automated.

A 20-minute recharge gives you about 20 minutes of play. The full play set sells for $80 with additional bots going for $35 each.