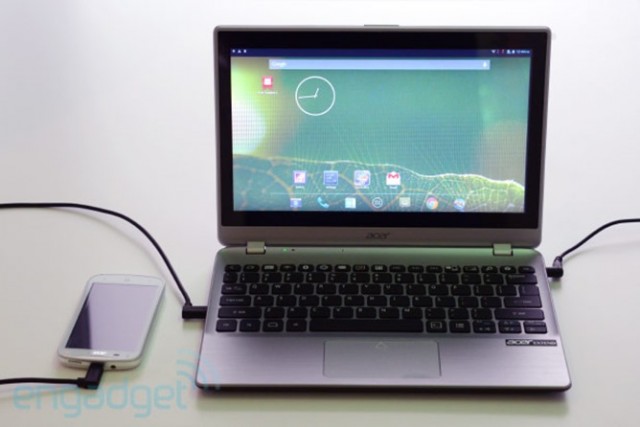 Do you remember when the Motorola Atrix 4G was first introduced to the world and we were fascinated with the idea of taking our smartphone, effectively putting in an empty laptop shell, and gaining access to a full keyboard and large display? The idea was that the smartphone could act as a notebook without having to have separate guts for the notebook.

This idea of having a unified workstation seems to be making a resurgence with the arrival of the Acer Extend concept. Once again, we are being shown what looks like a regular notebook, except it effectively has no “brain” or storage of its own. It’s just an empty shell that comes alive when you connect it to your smartphone. For demonstration purposes, a modified Acer Liquid E2 is being used with an MHL cable.

In doing so, your Android experience blows up onto a notebook-sized display that you can then navigate using the provided trackpad and keyboard. It’s not Windows or anything like that, but any productivity suite you have on your Android device can be that much more productive with Extend. There’s a 6000mAh on board to power it all.

There’s no saying when and if the Acer Extend will make it into the hands of consumers, since it is just a concept at the moment, but it will be interesting to see how people respond to this unified workstation concept again.