IFA 2013 is still a few days away, but Acer is apparently not willing to wait any longer to reveal some of its newest products. Over the weekend Acer unveiled it has a new smartphone, tablet and plenty of all-in-one computers on the way.

Let’s start by talking a bit about the upcoming Acer Liquid S2 (pictured above):

The Acer Liquid S2 has the honor being the world’s first smartphone to support 4K video recording. Does this really matter? Depending. While 4K televisions and monitors aren’t exactly commonplace, there is probably a niche for this kind of thing. Beyond that, adding 4K video recording so early into the game could be seen as a bit of a marketing ploy.

Outside of 4K support, the 6-inch handset has a full HD resolution, 2.2 GHz Qualcomm 800 processor and 2GB of RAM. So there’s plenty of power here. Here’s the specs in full, as per Acer:

So when’s this bad boy coming? The phone will be available by the end of October, though no word as to the exact date or what markets it will arrive at.

Acer Iconia A3 and updated colors for the A1 and B1

So what does the Iconia A3 offer up, specs-wise? While we don’t have the full specs list from Acer just yet, we do know the A3 has a 1280 x 800 resolution on a 10-inch display, as well as a 1.2GHz A7 (MediaTek?) processor. Other specs mentioned include a 5MP camera, microHDMI, microSD, Dolby Digital Plus speakers and Android 4.2.

Also on the tablet front, Acer has announced the 7-inch Acer Iconia B1 will now come in Ocean Blue and Vermilion Red, alongside its original colors. The 7.7-inch Acer Iconia A1 is also adding the colors white, Smokey Grey and Ivory Gold. 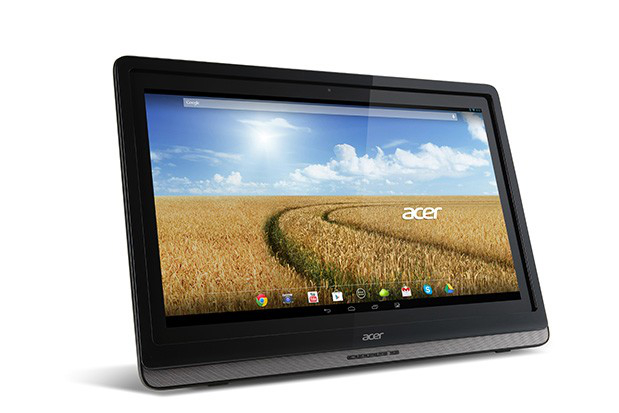 The most exciting all-in-one development is the Acer DA241HL, which continues Android’s slow spread into desktop territory. The device has a Tegra 3 processor, a 24-inch touchscreen and Android 4.2 Jelly Bean.

The DA231HL is expected to arrive in October, priced at €429 or around $567. A little on the high-side for an Android desktop machine, but we suppose it does have an impressively large 24-inch display.

While none of these Acer devices are that particularly exciting, they all have either a few unique features that help set them apart (like 4K recording), or are well priced (like the A3).

What do you think of Acer’s lineup? Impressed or not?