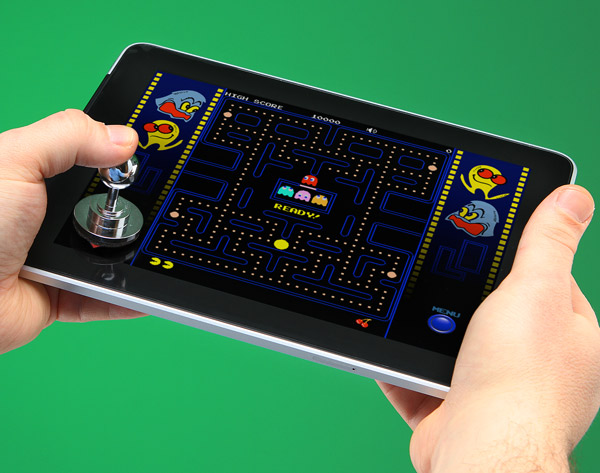 Let’s face it. As great as touchscreen controls have gotten on smartphones and tablets, there’s still something to be said about holding a real physical joystick in your hands to play video games. Designed for the iPad but working just fine with all sorts of other touchscreen devices, the JOYSTICK-IT Arcade Stick is on sale for 67% off.

The main idea behind the JOYSTICK-IT Arcade Stick is simple: it provides you with a real arcade stick that can be added, removed and repositioned on your iPad (or similar device) to give you increased precision, control and fun. They say it works with thousands of different game apps already, since it can simply be planted on-top of any on-screen control pad. These include Pac Man, Ridge Racer, Dig Dug Remix and iFighter.

There is no setup process, no wires, no wireless pairing. It works simply by applying pressure based on which way you tilt the stick. This is no flimsy cheap plastic piece of kit either, as the JOYSTICK-IT is made from solid milled aluminum. Want to use it on a dual stick shooter? You can grab two of these and have at ‘er too.

Regularly retailing for $11.99, the JOYSTICK-IT is on sale for just $3.99 on ThinkGeek. That’s quite the savings, wouldn’t you say?