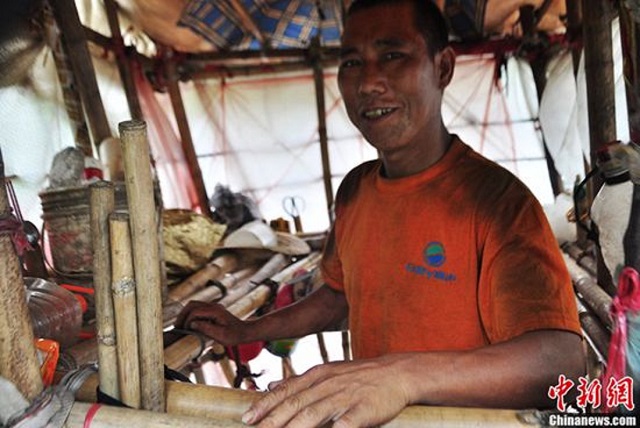 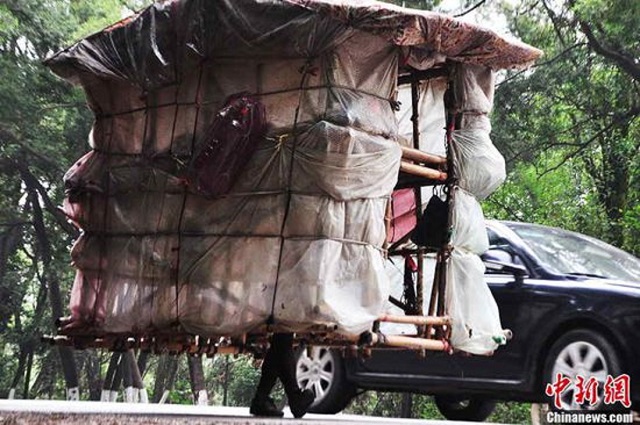 If you constantly travel for your work, you should probably know how difficult it is to book hotel rooms sometimes. But one man in China seems to have solved the issue by building himself a house which he can carry around. Yes, carry around. As you can see above, 38 year old Liu Lingchao carries his hand made hut on his back like a snail with a shell.

Lingchao collects plastic bottles and cans from China’s streets and sell them to make a living. So he has to keep moving across China, and the portable house eliminates the need to look for a shelter while he is on one of his 270 mile trips. The house that he is using now is reportedly his fourth one in five years.

The house, five feet wide by seven feet tall, has been made from bamboo poles and plastic sheet layers which keep the elements out. Inside the house, there is an elevated platform on which Lingchao sleeps. There are simple shelves around which accommodates cooking utensils, clothing and toiletries.

The entire thing weighs 132 pounds, so his walking speed is very slow. And that’s why he was given the nickname “Snail Man”.

You have to wonder if it would be easier to just carry around a tent and a suitcase…. What do you think about Lingchao’s mobile hut?