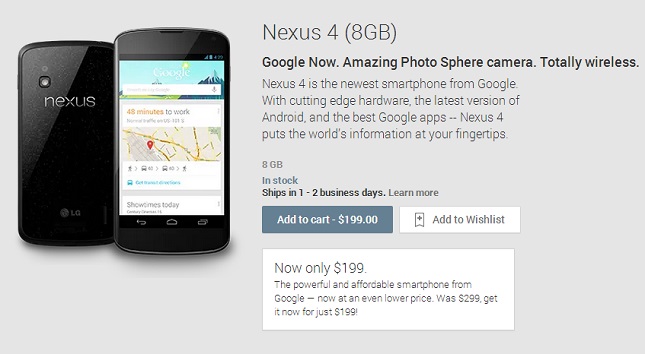 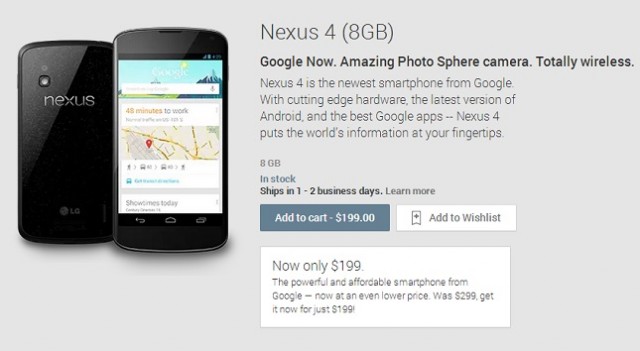 The average unlocked price of many Android smartphones easily comes in at around $500 – $800, and that’s why when Google first announced its $300 LG Nexus 4, the world was shocked. Decent specs, good build quality, beautiful design – all for just a little more than most folks pay for a subsidized phone? It seemed to good to be true, but beyond a few stock issues at the beginning of the device’s life, the Nexus 4 has continued to be one of the best unlocked handsets on the market.

For those that are still on the fence about switching over from the traditional carrier subsidized model, now is the perfect time to make the change. Why? Google’s Nexus 4 is now just $199 for the 8GB version, and $249 for the 16GB model. Impressive as hell, right?

Honestly I can’t say I’m too shocked about this price cut, as the next Nexus phone is likely just around the corner. Still, $199 is incredible. Even if the phone is far from cutting edge specs-wise, it is still more than capable of providing a solid Android experience and it is impossible to find anything that even comes close at $300, let alone its new $199 price point.

For those that need a refresher, the Nexus 4 is powered by a 1.5GHz quad-core Snapdragon S4 Pro processor and accompanied by 2GB of RAM. The device also comes in either an 8GB or 16GB model and has a 4.7-inch 1280 x 768 IPS LCD. As for the battery, you get a 2,100 mAh non-removable battery. The OS – of course – is always up to date thanks to Google.

So how about it, planning on rushing out and picking this one up, or not?