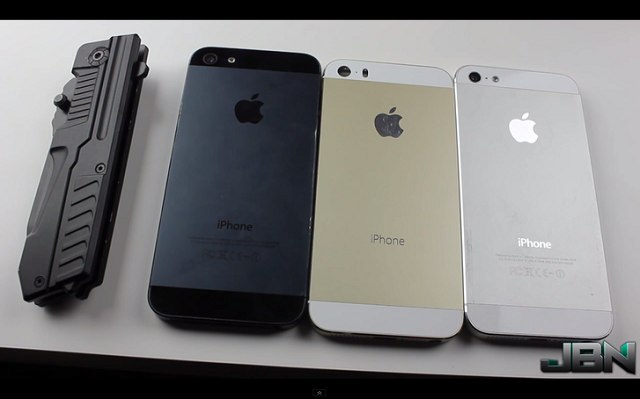 Apple is expected to unveil their iPhone 5S in the coming month, and the device is thought to be coming in several colors including gold (champagne), black, white and maybe graphite. But how will each of the devices stand against scratches? The video below should give you an idea about how scratch resistant the gold iPhone 5S is.

As you will see in the video posted below, a prototype case of the gold iPhone 5S and a black iPhone 5 are being put to the test by scratching them with a coin and a knife. The black iPhone 5 is very prone to scratches, and that shows in the video. When the coin attack was performed, the iPhone 5 was scratched on its back and its side. But there were no scratches on the gold phone’s back and only little markings on its side.

But when the knife was used, both were badly marked with the gold iPhone showing scratches more vividly. Of course, you won’t use a knife on your new iPhone, but it seems the gold iPhone will not be perfect for guys who are very rough with their handsets. But we do not know anything about the scratch resistance of the other iPhone 5S models. We will let you know when we find out.

Check out the video and leave your thoughts in the comments below. Are you interested in a gold iPhone 5S.