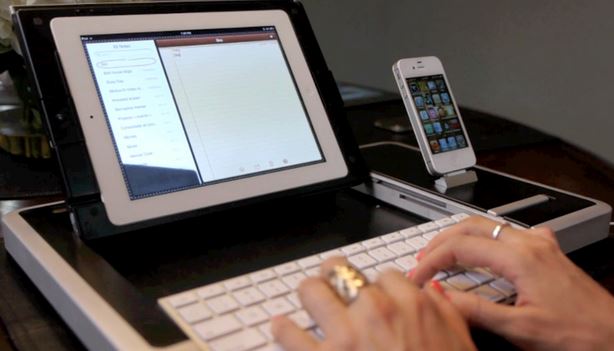 We’ve seen a broad range of cases and Bluetooth keyboards designed for the Apple iPad, but I don’t think there are any quite as ambitious as the Modus III dock and portable workstation. It really does aim to turn that humble tablet into a real computer for real productivity.

The Modus III has a flip-out kind of design with one arm being used to hold your iPad and then there’s another flap that folds out to reveal a “premium laptop” Bluetooth keyboard. Both of these segments can be adjusted to different angles and they can slide back and forth with “ErgoTrak” to suit the configuration that you need. On the right side is an additional docking station for your iPhone or other smartphone, so you can have a “dual display” level of productivity. What’s handy is, when you’re done, it can all fold up into a size no larger than a regular 15-inch notebook PC.

Other features include the built in power and volume buttons, integrated front-facing speakers, magnet sleep/wake functionality, adjustable ergonomic typing angles, cord storage compartment, and a detactable case. The Modus III is made with an aircraft-grade aluminum frame and high-strength polycarbonate interior.

I’m not sure it’s something that I would personally want to use, but I can see how it could be useful for business travelers and other people who really use their iPad like a laptop anyway. The developers are seeking $95,000 on Kickstarter to fund their project. A minimum pledge of $169 will land you one of the first Modus III units and you get free shipping when you share the Kickstarter page on your Facebook, Twitter, Tumblr, Reddit or Google+.