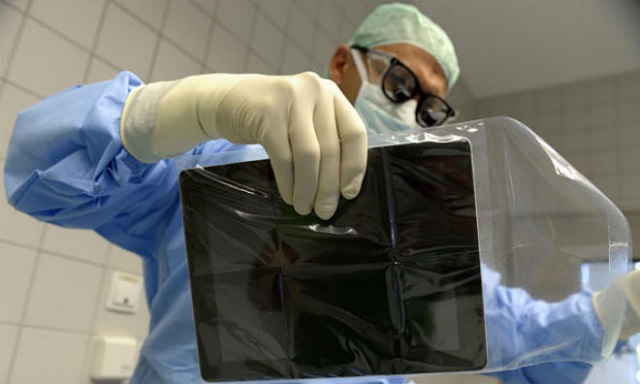 While thinking about many possible uses for the Apple iPad, you probably haven’t imagined seeing the tablet being used inside an operating room. Well, the device and an augmented reality app have helped surgeons in Bremen, Germany, complete a liver surgery.

The surgeons used the iPad camera to take a picture of the patient’s liver. Then the app created the augmented reality overlay of the organ, which was built using scans which were performed earlier.

With the help of the virtual 3D pre-op plan, the surgeons were able to conduct the surgery with knowledge about where structures such as tumors and blood vessels were located. So they were able to cut at the right places and there was minimum blood loss. Traditionally, doctors locate blood vessels by looking at a printout.

We certainly are going to see the AR app being used during more surgeries in the future. And not just on the liver, as it could be utilized for removing tumors from other organs as well. If you want to see more pictures from the surgery, such as the patient’s opened up abdomen, you can click this link.