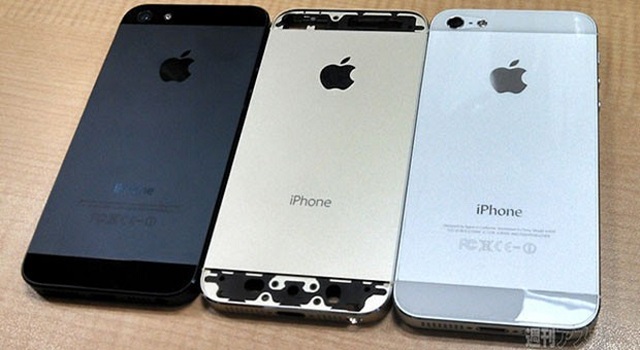 We have been hearing about an Apple iPhone 5S with a golden casing, and now we have a chance to take a peek at the device all thanks to a Japanese website. That’s certainly a golden version of the iPhone we can see in the image above, next to black and white versions of the iPhone 5.

The new shell has reportedly been produced by parts supplier Moumontai. The device seems to be having a similar form as that of the iPhone 5, but the “iPhone” inscription on its back is in a thinner font. You can check out more photos by heading here.

As we told you earlier, both the iPhone 5S and the cheaper iPhone 5C are expected to be unveiled on the 10th of September. And recently, we heard that the handsets might get released in the US and other markets around the world 10 days later on September 20th.

The iPhone 5S is thought to have an A7 processor, an improved camera, and a fingerprint scanner. The low cost iPhone 5C is said to be having a plastic casing, which could be scratch resistant unlike the plastic cases of the iPhone 3G and 3GS. The video below shows a phone casing, said to be that of the cheaper iPhone, being tested for scratch resistance.

So are you waiting for a new iPhone? Share your thoughts below.