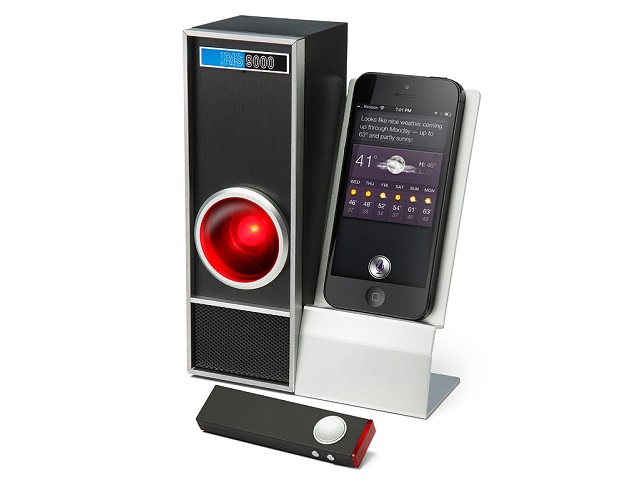 TV shows and movies have sure set the bar high for future tech, particularly when it comes to self-aware machines and voice-powered assistants. Not only do we have computerized assistants like Rudy from the Jetsons as an example, but then there is Star Trek and literally dozens of other talking computers found in the media of days-gone-by.

Today we live in an age where “talking computers” are possible, from Google Now to Apple’s popular SIRI. But are these systems really as exciting as they should be? After all, Captain Kirk could bellow out a command from across the room, he didn’t need to press a button and speak right against the device in order for it to respond.

For Motorola, the solution is the Moto X, which can listen to you even if you aren’t right beside it. What about all the Apple fans, where is a SIRI-powered solution to this problem? That’s where IRIS 9000 comes in.

This unique stand turns SIRI into a voice-powered system that can be used even across the room. You still have to push a button, but at least this time it is on a tiny micro-remote that you can keep with you without having to be right next to your smartphone. As for responding, the IRIS 9000 cradle has a built-in mic that picks up your voice and then the embedded speaker amplifies Siri’s spoken responses. Even better, you can use IRIS 9000 as a full speakerphone system.

Intrigued? Right now you can get this unique IRIS voice system from ThinkGeek on sale for just $49.99, about $10 off the original price.