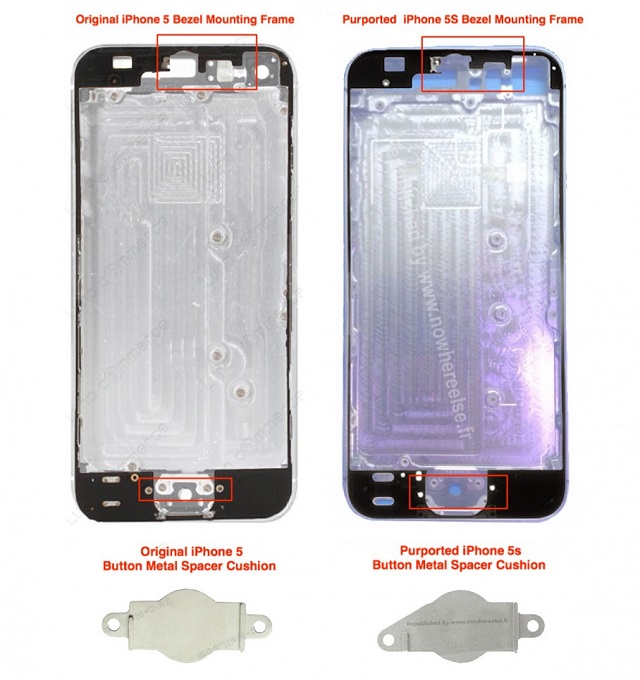 We have been hearing a lot about fingerprint scanning tech for future iDevices ever since Apple acquired AuthenTec last year. Recently, a folder within the iOS 7 beta suggested that the iPhone 5S could be indeed coming with the sensor as long rumored. And now leaked images showing what are thought to be internal components of the upcoming device appear to be supporting speculations about the existence of the fingerprint sensor.

The images come to us from French blog Nowhereelse.fr which has a history of leaking components of upcoming Apple devices. The images are comparing what is said to be the iPhone 5S with the iPhone 5.

As you can see in the image posted above, the metal spacer cushion near the home button has been redesigned. There seems to be space for accommodating additional components, maybe those for the fingerprint scanning tech.

Of course this is all speculation, but we should be able to know most of the details about the device on the 10th of September. What’s expected to be revealed at Apple’s event is a device which boasts an A7 processor and an improved camera. Recently, KGI’s Mingchi Kuo was talking about a golden casing option for the handset. Many are expecting to take a peek at the rumored cheap iPhone 5C as well.

What are your expectations for Apple’s upcoming iPhone? Do you want a fingerprint sensor on it?