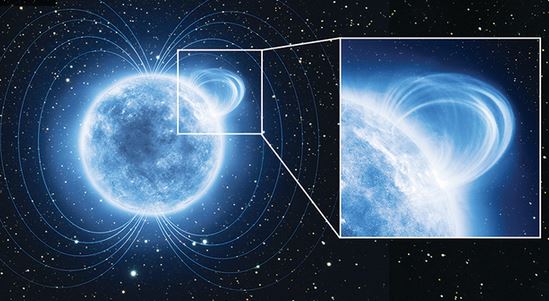 Science is amazing. We think we know something and then we prove ourselves wrong. We thought the Earth was flat and we thought the Sun revolved around the Earth, but we now know that neither of those is true. And scientists thought that some dead star had a strangely weak surface magnetic field until they used some different techniques to discover it actually has one of the strongest.

There’s a particular kind of neutron star that’s called a magnetar. It’s basically a dead star that has collapsed on itself and the one of current interest is being called SGR 0418+5729 (memorable, I know). Since it’s a dead star that collapsed on itself, it’s very dense, having more mass than our sun, but only being about 20km across. That’s why scientists thought it was strange that they were only reading a magnetic field of 6 x 1012 Gauss. That’s 100 times lower than a typical magnetar.

So, they investigated further. They then learned that this magnetar, according to researcher Andrea Tiengo, “must have a super-strong, twisted magnetic field reaching 1015 Gauss across small regions on the surface, spanning only a few hundred metres across. On average, the field can appear fairly weak, as earlier results have suggested. But we are now able to probe sub-structure on the surface and see that the field is very strong locally.”

They say that these localized magnetic fields are akin to solar flares, but they have bursts of X-rays instead. Isn’t science amazing?