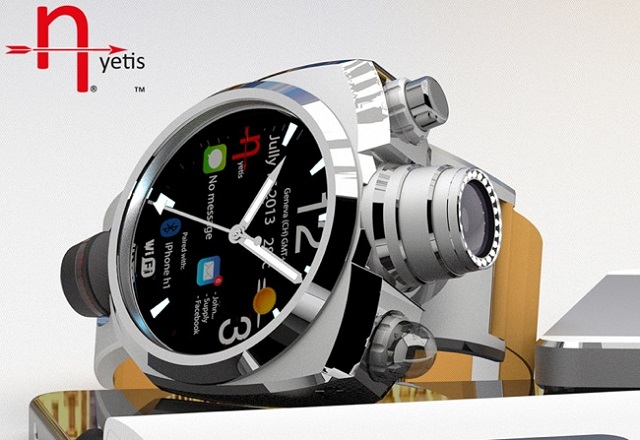 While we are waiting anxiously to know all about the smartwatches that are coming from Samsung, Google and Apple, an impressive wearable tech has just been revealed. Say hello to the Hyetis Crossbow.

The Swiss-made smartwatch features a 41-megapixel camera, the same one on the Lumia 1020 as you probably know, and a ring flash on its top edge. Coming in a titanium casing, the Crossbow has a touchscreen with sapphire crystal on top and even if the battery runs out it will show the correct time as it features automatic wound movement. It can reportedly be juiced up using an inductive charging pod.

But there’s more! The watch can connect with Android, iOS, and Windows Phone 8 devices, and it features Wi-Fi, Bluetooth, and NFC. It can also track GPS position, ambient temperature, altitude, depth, and biometric information, though the final model may not have these functions.

But all these features mean a hefty price tag of course. The watch costs a whopping $1,200, and it will be available for pre-order sometime in the future. So, are you interested in getting your hands on the Hyetis Crossbow?