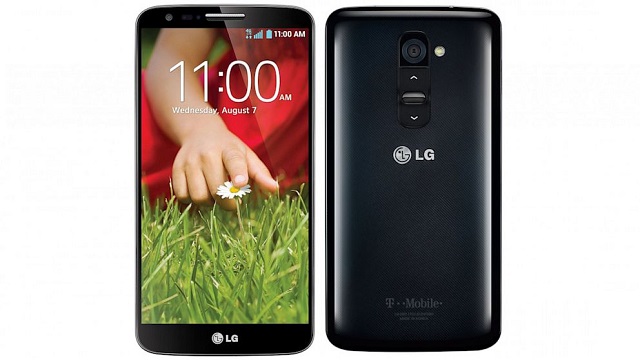 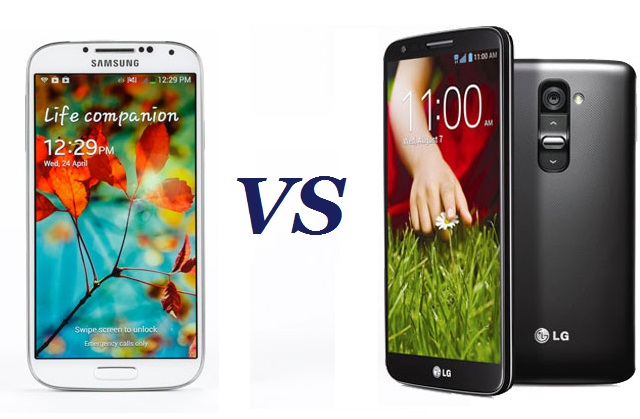 In the smartphone world, LG seems to have a reputation for being the “other” brand – a creator of products that aren’t necessarily exciting or hype-worthy at first, but end up fitting the bill due to pricing and other factors. Starting with the LG Optimus G and Nexus 4, this has started to change. LG has been working hard to push the bar, even if it has ran into a few snags along the way.

With the LG G2 we finally see a side of LG that goes beyond just copying the competition. While some aspects of the G2 still seem to borrow from Samsung (like the Touchwiz-esque UI), the design and placement of the power and volume buttons shows that the company wasn’t afraid to think outside the box a little here.

Still, if the LG G2 really wants to stand out and make a name for itself, its not so much the HTC One and Motorola Moto X they have to worry about one-upping, but Samsung’s Galaxy S4.

So how do the two handsets compare, at least on paper? Let’s take a look: 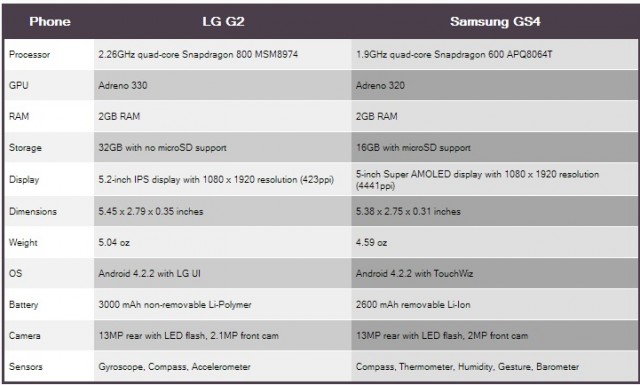 While the above chart doesn’t include everything, it should give you a basic idea of how the two devices compare spec-wise.

Now let’s jump in a bit deeper, shall we?

Samsung has recently come under some fire due to its decision to stick to the plastic casings in which the company has built its smartphone empire. With HTC and so many others going with glass-backings or metal frames, Samsung was seen by some as ‘cheap’ due to its refusal to move on from plastic.

In an interesting turn of events, it looks like LG is ditching the glass back of the Nexus 4 and Optimus G in favor of a plastic case, just like Samsung. That said, plastic doesn’t really mean cheap. In many cases, the Galaxy S4 has been proven to be a very durable device, and we suspect that the LG G2 will be no different.

Beyond case material, the Galaxy S4 and Optimus G both have somewhat similar designs at first glance (body shape wise).

Of course what really sets the G2 apart is that its thin bezels allow it to fit a display that is .2-inches bigger and it is free from buttons. To squeeze in this extra space, LG made the decision to place the volume and power buttons on the back of the phone, certainly making the LG G2 stand out from other phones on the market.

As seen in the chart, the G2 is a bigger phone with a slightly larger display – but the difference in size and weight is pretty minimal here. The G2 might be 13% thicker than the Galaxy S4, but its only .45 ounces heavier.

The Hardware: CPU, GPU and RAM

Let’s start with the only hardware aspect that we can actually see (besides the casing): the display. From a pure paper-compared standpoint, the two displays are quite evenly matched. LG’s display might be a bit larger, but they both have 1080p resolutions and the Galaxy S4 actually packs more pixels per inch.

Next, the processor and GPU.

Let’s face it, the G2 one-ups the Galaxy S4 here significantly. The Snapdragon 800 is a considerable power upgrade over the Galaxy S4’s Snapdragon 600. Of course in real-world use, it might not make a lot of different to most folks.

The same goes for the GPU, the Galaxy S4 is weaker but unless you do alot of gaming and graphics heavy stuff, this won’t probably be a deal-breaker for those that are more interested in the GS4.

As for RAM? Both devices are evenly matched with 2GB.

The Hardware: Storage and Expansion

From LG’s press release, we know that there will be both a 16GB and 32GB version of the G2.

While this stacks up against the GS4 at first glance, the LG G2 doesn’t include microSD, which could be a deal-breaker for those looking to expand their devices storage down the road.

Until we get a better hands-on look at the GS4 versus the G2 – it’s hard to really judge the camera differences. While both are just 13MP, the G2 packs Optical Image Stabilization and a few other goodies that could make it perform slightly better.

LG is claiming the LG G2 can make it through a full day’s work/play. That said, we really don’t have any solid comparisons here yet.

The G2’s battery is larger, but again so is its display and it has a more demanding CPU/GPU.If we had to take a guess, we’d say that the two devices will perform similarly whne it comes to overall battery life – but take that claim with a grain of salt.

Both phones have quite a few of the same wireless extras including the ability to control IR-compatible devices like your Television. The GS4 and G2 also pack NFC, the usual Bluetooth and WiFi standards, GPS, and the list goes on.

Where they differ comes to LTE, though. The Galaxy S4 might support LTE, but the G2 can also support LTE-Advanced, a higher performing variant of the technology. Right now, there aren’t really any networks in most of the globe that take advantage of LTE-A, but this could change.

Of course, Samsung has already released a Snapdragon 800-powered Galaxy S4 LTE-A model in Korea and is said to be planning a similar release internationally. So if you don’t own a GS4 yet, there is still a chance you may eventually be able to snag it with a Snapdragon 800 processor. 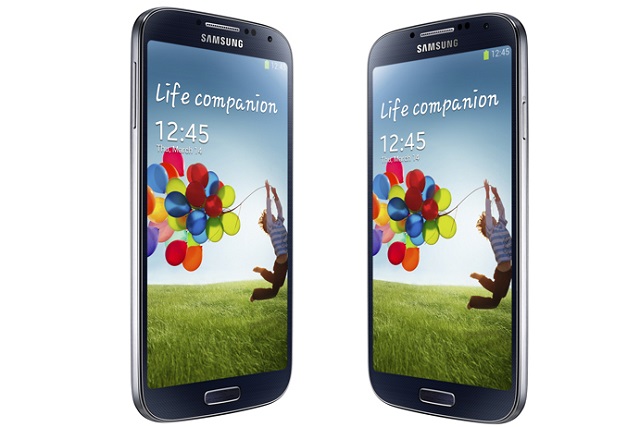 Both phones have Android 4.2.2 and both run custom UIs. Really, it comes down to preference here.

In some ways, LG G2’s UI seems somewhat reminiscent to TouchWiz, though it does have a few cool extra like KnockOn which lets you turn your screen on/off by simply tapping twice on the display.

Both phones are packed full of special features. For the Galaxy S4 that includes things like Smart Scroll, Smart Pause, Air gestures, Air View, S Translator, S Health, Eraser shot – and more. (For more details about these features, check out the detailed features piece at MNN).

As for the LG G2? You get its new volume/button placement, the above-mentioned Knock Knock feature, LG’s Quick Memo app, Answer me (automatically answers phone when put to your ear), Plug & Pop (brings suggested list of options when USB cable or headphone is plugged in), Quick Remote, Slide Aside and more.

Another cool feature for the LG G2 is Guest Mode, which uses a secondary unlock pattern and brings up a series of pre-selected apps making it perfect for guest users and children alike.

Which of the phones have a better set of special features? Again, the experience is a personal one. What one person loves, another might find to be nothing more than a cheap gimmick.

The Galaxy S4, and several of its variants, can be found just about everywhere in the globe with pricing around $199 with contract for the 16GB model.

The LG G2 will roll out globally within the next 1 – 3 months, though no word on pricing. If we had to take a guess, a similar pricing structure to the GS4 seems likely.

LG has really raised the bar here with the G2. Is it better than the Galaxy S4 though? We’ll let you decide in the comments below.