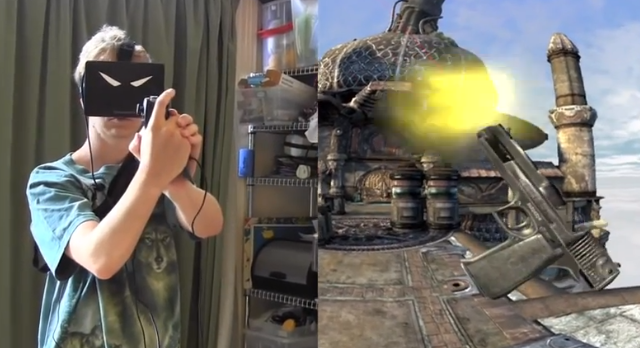 As if we weren’t already impressed by all the wonderful things that we could do with the Oculus Rift headgear (check out here, here and here), now we have the “Hydra Cover Shooter” demo from Australian developer Teddy Lipowitz. This brilliant first-person-shooter utilizes the Oculus Rift and Razer Hydra motion controllers.

As you will see in the video below, Lipowitz keeps one Hydra wand in his hand to move forwards and backwards and to fire a gun, while another wand is strapped onto his chest for up and down movement. And the Oculus Rift is, well, on his head.

The game requires a player to fight robots which fire at you with plasma rifles. Lipowitz says, “To survive, you’ll need to pop up from behind cover and take your shots, or blind fire around corners and hope to hit them”.

The system’s position tracking is apparently so good that players have to take care while using it. “Please be careful when playing this demo, lots of people try to support themselves on the crates when they try to stand up or when leaning up against a column, but find there is nothing there.”

Of course in the near future we are going to see a lot more stuff for which the Oculus Rift is utilized. Are you excited? Share your thoughts below!