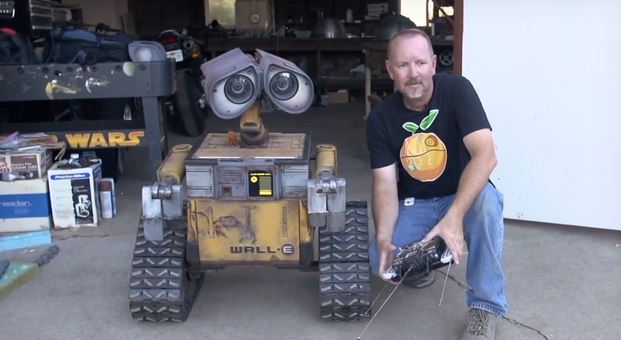 In addition to Up, Wall-E is easily one of the more “grown-up” of movies to come out of Pixar. That are some serious life lessons in there for adults, just as there is entertainment for the children. And no matter your age, I think we all fell in love with the adorable Wall-E and we wanted to have a robot like him of our own. And one club really did.

We’ve seen some smaller replicas and we’ve seen a handful that have the cute moving eyes, but I don’t think we’ve seen a life-sized replica of Wall-E that is as ambitious as what Michael McMaster and his group of robot-creating friends have been able to put together. This project was literally years in the making; they knew they wanted to make one even before the movie was released in 2008.

And it’s not like they’re new to making robot replicas either. The crew had already built an R2-D2 robot from Star Wars in the past. With the Wall-E replica, they wanted to make sure that everything was perfectly to scale down to the last inch. What’s cool is that not only does Wall-E move the way he should, but he’s also been loaded up with plenty of his sound bites from the movie too.

Unfortunately, this Wall-E replica isn’t as smart as his silver screen-sourced inspiration. He is not independent, as he is controlled by a handheld remote, but I think the mind-blowing level of detail is easily something to be commended. Now if only they could making a floating EVE to go with him.