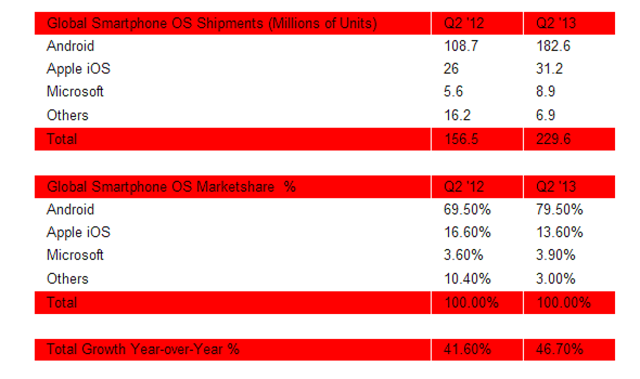 Android is certainly a big name in the world of smartphones. How big, you ask? Well, you just have to take a look at the latest numbers on shipments of smartphones for Q2 of this year from Strategy Analytics. According to their data, among the 229.6 million units shipped for the quarter 182.6 million smartphones (a whopping 80 percent) were running Android.

Strategy Analytics Executive Director Neil Mawtson says that this dominance of Android is a result of many factors including competitive licensing costs, many hardware partners, and a very huge apps store. And of course Android is available on smartphones of all sizes and shapes and which are available at various price points in all parts of the world.

When one OS gains, another has to suffer. Phones shipping with Apple’s iOS accounts for 14% of the total units shipped in Q2 2013, a drop from 17% back in the second quarter of 2012 and the company’s lowest numbers since 2010.

Microsoft is in the third spot with the highest figures since it came into the smartphone race, with 4% of the total shipments, but the company still has a long way to go.

Linda Sui, Strategy Analytics Analyst, says, “Microsoft’s WP8 platform still needs to improve in at least two areas before it truly takes off. First, the license fee charged to smartphone makers for WP8 must be more competitive to compete with Android in lower price-bands. And second, Microsoft must dramatically accelerate its support for advanced technologies, such as octo-core chipsets, because WP8 continues to lag behind Android in the premium smartphone category“.

It’s not just in the case of smartphones that Android is shining: 67% (34.6 million units) of the tablets shipped in Q2 2013 were running Android.