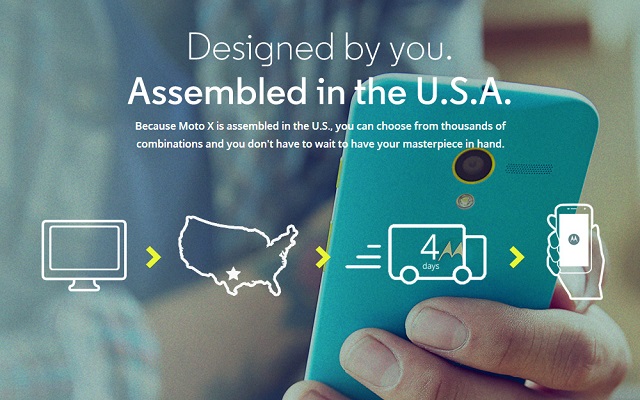 After all the rumors, speculation and hype, the Moto X is now official! The latest Motorola flagship brings quite a few interesting features, included the long-hyped customization features.

Let’s start with the hardware. Here’s a full run down of what to expect – based on what we currently know:

Like with the new Droid series, the Moto X has touchless control features that let you quickly search, launch the camera and so much more.

What really stands out with the Moto X isn’t the hardware, it’s the customization options. Using a special online tool called “MotoMaker” you can choose from 18 different colored back plates, white or black trim and seven accent colors for things like power button, volume and the ring around the camera lens.

There are also unique material choices in the works for the backplate, such as wood and perhaps even carbon fiber. Outside of the cosmetic choices, Motorola is also allowing you to choose a default wallpaper and a custom startup screen that will display a little message of your choice, such as “Hello Andrew!”.

Motorola is also teaming up with Sol Republic and others to offer customizable accessories (headphones, cases, etc) that can match or compliment your handset.

In the United States at least, the Moto X is expected to arrive at the end of August, or even in early September. Unfortunately the phone’s MotoMaker features will be limited only to AT&T at launch. That means other U.S. Carriers will not be able to customize the handset and will merely have black or white color choices from day one, though the MotoMaker tool is expected to ‘eventually’ come to the other carriers.

The pricing is also much higher than some expected, with the 16GB model costing $199 on contract and the 32GB at $249.

So what do you think, excited for the Moto X or not?