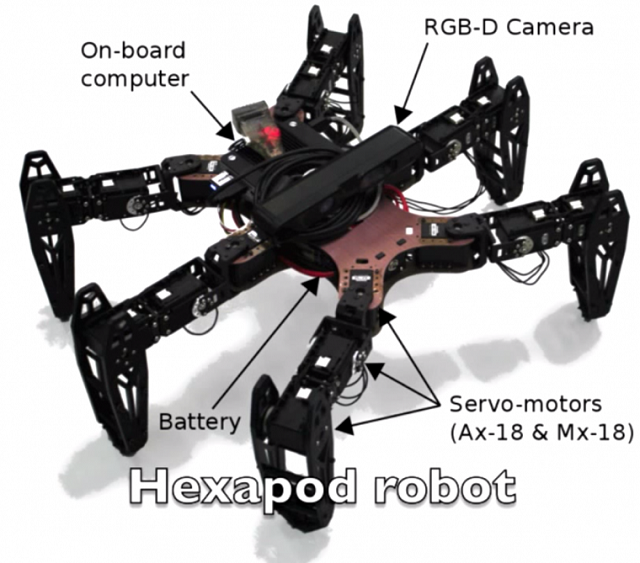 We took a look at the T8 robot tarantula earlier. While that robot certainly is beautifully designed, it probably will not move in the best possible way if it loses one of its legs. But that’s not the case with the hexapod robot that you see above designed by roboticists at the Pierre-and-Marie-Curie University.

The hexapod makes use of what the team calls T-resilience (T for Transferability-based) algorithm to determine a new way of walking, after losing one of its legs, for getting maximum post-damage speed.

At the start the robot will have an understanding of what its undamaged anatomy is. Once one of its legs is cut off, it will start to test 25 alternative gaits to determine which way of walking will give it a speed close to 26 cm/s which it used to travel at when equipped with all of its legs.

Within 20 minutes the robot determines a gait which will allow it to move at 18 cm/s, which is quite impressive when looking at the initial post-damage speed of 8 cm/s.

Check out the video below to know more about the study.

So sometime in the future we expect to see a rescue robot with the new hexapod’s ability, and we may even see robots capable of self repair. Honestly – that’s kind of a scary thought. What do you think?