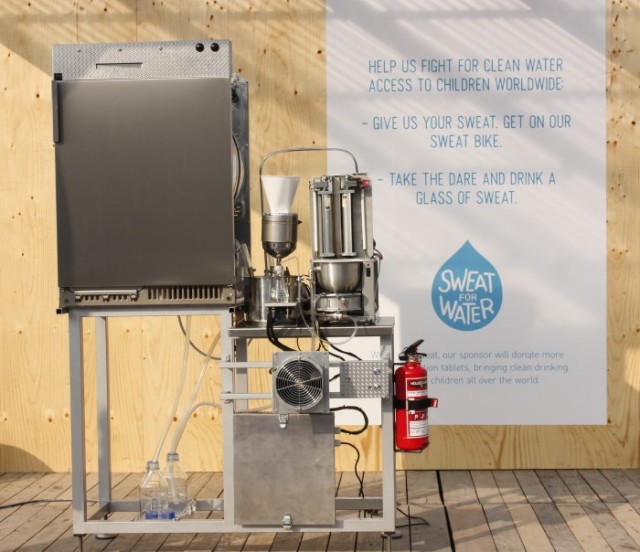 Recently, engineers were commissioned by Unicef to build something a bit different. Andreas Hammar headed a project which would be called the stomach turning name of Sweat Machine. This odd machine purifies body sweat into potable drinking water.

The machine uses a unique technology for filtering, called Membrane Distillation. The technology was developed by the Royal Institute of Technology in Stockholm and HVR.

It works by using a plastic cassette, where water is filtered by heating it into vapor and then circulating that vapor between two membranes. The end result is a separation process that effectively removes the impurities and turns a sweat soaked T-shirt into as much .4 fl oz of drinking water.

Why the hell would anyone want to make such a machine? According to deputy executive director of UNICEF Sweden, Per Westberg:

“We wanted to raise this subject in a new, playful, and engaging way.”

More than 780 million people lack access to clean drinking water, so anything to bring attention towards this issue is a good thing. Of course, Unicef doesn’t necessarily expect the world’s water shortage problems to be solved by drinking sweat, but it’s certainly a good way to send a clear message.

If you really want to make an impression, you have to do more than build a machine. That’s why Unicef set the machine up at the Gothia Cup for international youth soccer. There, more than 1000 people managed to have a taste of delicious, purified sweat.

In the end, there are more effective ways to deal with water purification and shortages than turning sweat into drinkable water, but you still have to applaud the efforts of the creators behind this truly unique device.