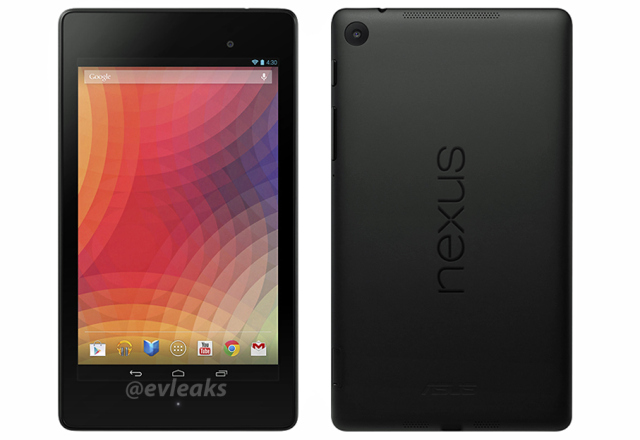 Google’s much anticipated next-generation Nexus 7 tablet should be unveiled this week, but that doesn’t mean we won’t see any more leaks related to the device. This new one, which seems to be a press image of the Asus-made tablet, comes from @evleaks.

As you can see, the device’s backside is different from that of the original Nexus 7 as it is missing the dimples. The new one, as expected, also comes equipped with a back facing camera.

The new Nexus 7 (no hints about what its official name will be) should come with a 7 inch 1920 x 1200 display, a 1.5GHz Snapdragon 600 quad-core processor, 2 or 4GB RAM, 5MP back and 1.2MP front cameras, and will probably let us take a peek at Android 4.3, which is said to feature improved touch sensitivity and support low-energy Bluetooth.

An earlier leak suggested that the 16GB and 32GB versions of the tablet will cost $229 and $269, respectively. The device is expected to be available from the Google Play Store sometime soon, hopefully without any supply issues. Meanwhile, new leaks are suggesting that the new Nexus 7 will be available from Staples on July 31st and Best Buy a day earlier on the 30th.

And yet another leak is showing the name Nexus 7 2 in Carphone Warehouse’s system. Check it out here.

So, who all are waiting to get your hands on the upcoming Nexus 7? Share your thoughts below.