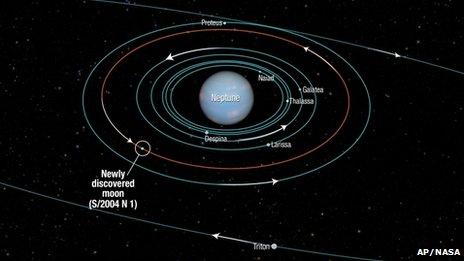 It’s amazing to think how quickly our knowledge of space has changed. There was a time when mankind thought the Sun revolved around the Earth, that advanced aliens might live on Mars and that 9 planets could be found in our Solar System. All of these previous ideas and ‘facts’ have completely changed over the course of time, and we are continuing to learn new things about space each and every day.

In recent times we have found quite a few planets outside of solar system, many of which could potentially support life. We’ve even learned that our Solar System has a very wide back porch that takes quite some time to cross. Even closer to home, the Hubble Space Telescope has just discovered that Neptune has a new moon that was apparently missed back in 1989 when the Voyager passed by the planet.

The new moon is now designated as S/2004 N1 and is the 14th known moon orbiting the planet – that’s a lot of moons!

So why’d we miss the moon in the first place? Probably because it is so darn small, coming in at just 12 miles across. According to Scientists, the new moon would likely complete a full orbit around Neptune once every 23 hours.

The moral of the story is that you never know what’s lurking around the corner in space.. heck, maybe those advanced Martians aren’t so crazy after all.