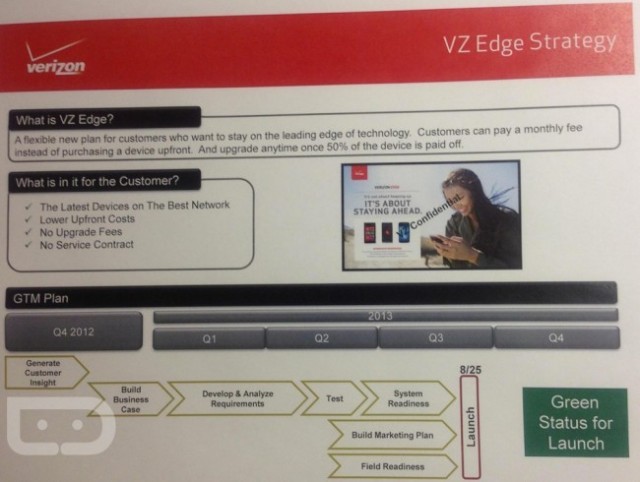 Two years can feel like an eternity for people who love having the newest smartphones and that’s a big part of the appeal of T-Mobile’s new JUMP program. Likely inspired by their magenta-colored competitor, Verizon is apparently working on an early upgrade program of their own and its called VZ Edge.

This comes by way of some leaked training documents that talk about how VZ Edge will effectively let customers upgrade to new cell phones every six months. If this sounds too good to be true, it probably is. Let me explain.

VZ Edge appears to be an extension of the Verizon Wireless Device Payment Plan that they had previously announced. With VWDPP, customers can buy a phone without contract, spllitting the cost of the unsubsidized phone into 12 equal monthly payments, plus a $2.50 per month financing charge. If you buy a $600 phone, for example, that works out to $50 + $2.50 per month, on top of your regular monthly charges.

With VZ Edge, you are able to buy a new device when you have paid off half of the previous phone. That works out to six months into the program and, thus, you can upgrade your phone twice a year. The details, however, are still really murky. Is it going to be like JUMP where you trade in your old phone and the remaining balance is forgiven? Or are the payments simply stacked on top of one another and you keep both phones? It’s unclear, but all should be revealed when VZ Edge launches at the end of Q3.