The next generation of gaming is almost here and with it will come new social experiences, improved graphics and extreme multi-tasking compared to past generation consoles. If PS4 chief architect Mark Cerny is to be believed, it will also usher in a new “renaissance of gaming” that will feel somewhat familiar to the ‘golden age’ of PS1 gaming.

Speaking at a Develop Conference in Brighton, Cerny talked about how the PS4 would change the gaming world by bringing indie experiences to the forefront.

“With PSone there was no way to make an indie title,” says Cerny. “The hardware didn’t support digital downloads and all games were distributed on CD-ROMS. There was no way for creators to directly reach their audience.

“But triple-A game development was very different than it was today. Crash Bandicoot, which sold six million units, was created by just seven people. A typical individual would contribute broadly in the creation of a game.”

“Due to small team sizes the barriers to creating new types of experiences were quite low, and consequently the diversity of games available at retail was quite high. As a result, there was a certain fun factor that was an intrinsic part of the PlayStation DNA in those years.

“Concept-driven titles like PaRappa the Rapper, Devil Dice and Intelligent Cube were well received by the game playing audience and each went on to sell over a million units.”

Cerney continues by explaining that this diversity of games was lost with the PS2, as experiences grew more advanced and required larger teams. It also meant that mainstream titles became more common/streamlined and unique, diverse titles became less common. With the PS3, the problem only worsened.

This time around with the PS4, Sony wants to return to an era where we not only have huge, large-budget mainstream games but also a healthy dose of unique, diverse indie experiences that bring back a similar vibe to the PS days of old.

But how will they get there?

It’s one thing to say they are interested in bringing diverse experiences, but how do they ensure that such titles make their way to the PS4? For starters, Sony is breaking down barriers that have hindered indie development in the past.

“Sony has woken up and realized the real potential in Indie gaming.”

The PS4’s discoverability of indie titles is also improved, ensuring that the titles are easier to find and play on the PS Store. Additionally, self-publishing to the PS4 is giving indie developers more control over their PS4 development expeirence.

It goes beyond just providing tools to make things easier for small studios. Sony says that its secret weapon is simply listening to its developers.

As SCEA VP of developer/publisher relations Adam Boyes puts it:

“It’s talking directly [to developers], it’s listening to them, it’s caring what they have to say, and then it’s actually taking that feedback and applying it to improving things”.

“A lot of times you sort of complain down an empty hallway and nobody’s listening. So what we’re doing this time is we’re talking the talk, we’re telling them that we’re pro game, pro developer and then we’re walking the walk. We’re literally meeting on a weekly basis, changing and evolving all the processes. We’re basically saying, ‘what’s bugging you most?'”

So why the push forward on indie titles?

Sony has woken up and realized the real potential in Indie gaming, particularly with successful titles like the Walking Dead series. 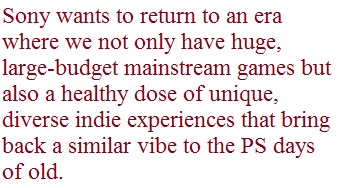 “With the release of PlayStation 4, we understand we have an opportunity to fundamentally alter the landscape of gaming.”

We’ve gone very far with graphics, now the next step is to continue evolving gameplay experiences. Unique indie titles certainly seem to do more on that front than many of the big-box, large-production titles from the massive studios.

What’s next in gaming

The PS4 is a powerful beast, but what really makes it great for indie development is that it is, basically, nothing more than an AMD-powered PC. This makes life so much easier for big studios, little studios and any and all involved.

Personally, if Sony can really live up to the claim and usher in a world of creativity freedom and unique experiences as found in the early and mid-90s, that would be epic.

The SNES, PS1, Dreamcast and N64 are some of my favorite consoles of all time, not because of graphics but because of unique gameplay. While the years that have passed have also seen unique experiences, I agree that the days of the early PS1 games probably saw some of the most diverse games ever made.

What do you think of Cerney’s claims? Are you excited for the Sony PS4, or are you more interested in what the Xbox One will bring to the table?