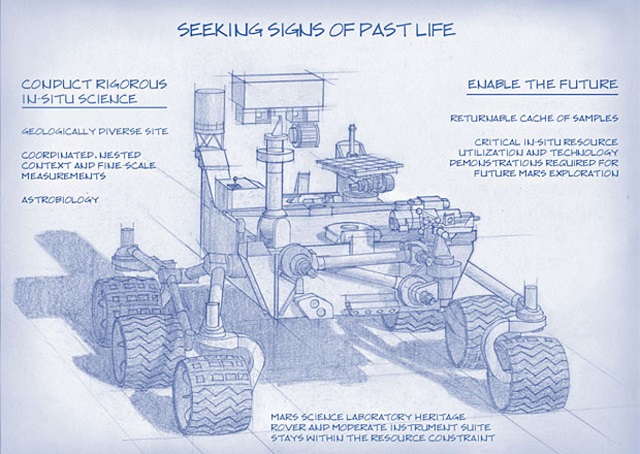 NASA is working on a new Mars rover which will be part of an unnamed 2020 mission to the red planet. The new machine will be searching for signs of past life, and not current life.

The new rover will be based on the design of its predecessor, Curiosity, which is still roaming around the surface of Mars. While Curiosity checked the planet for regions that could have helped sustain life, the upcoming rover will be equipped with instruments that will allow it to search the hospitable places for proof of past life.

The new rover will be collecting and storing rock and mineral samples to search for biosignatures. NASA is also planning to bring the samples collected to Earth, though they haven’t announced how they will be doing it.

It is expected that the new rover will cost around $1.5 billion, about $1 billion less than its predecessor. They were reportedly able to lower the expected cost by deciding to utilize Curiosity’s design and some of its spare parts, chassis and landing system.

Cutting costs is a good thing, as uncertainty already surrounds the funding for future space explorations. As James R. Webb, Ph.D., professor of physics and director of the SARA Observatory at Florida International University, says, “The challenges are both Earth-based and space-based. Even getting funded year-to-year is a huge uncertainty in this political climate“.

So, why just signs of past life and not current life, you ask?

“To date, the evidence that we have from observations of Mars and Martian samples is that we don’t have the clear indication that life is at such an abundance on the planet that we could go there with a simple experiment like Viking [had] and detect that [life] there“, said Brown University professor Jack Mustard, chairman of the 2020 rover mission’s Science Definition Team. “To go and look for simple organisms, or not-so-simple organisms, that are living within that toxic, harsh environment we just think is a foolish investment of the technology at this time“.

According to the scientists, the better idea is to check for signs of life which could have existed in the past when the planet was much warmer and wetter.

Do you think that the experiment will turn up prove of past life, or is Mars a barren wasteland like some might have us believe?