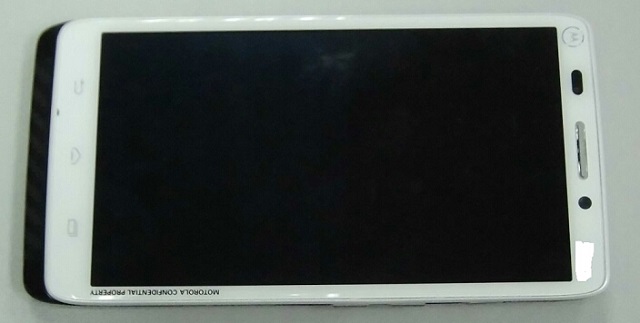 It has been rumored that Motorola is planning to introduce the Droid Ultra, Maxx and Mini on Verizon sometime in the future, and we were able to take a peek at the DROID MAXX earlier all thanks to @evleaks. Now we have the image of the DROID ULTRA in white which comes to us via xavierk75 on XDA.

The device has the model number XT1080, which recently hit the FCC with support for Verizon’s 3G and LTE networks. The bezel is not as thin as that of the RAZR M and it should be Kevlar that’s seen at the very bottom of the handset.

It seems Motorola has decided to go with capacitive touch hardware buttons for the device. As you might know last year the company moved to on-screen buttons. Additionally, the Jelly Bean update gave a stock Android look for the back, home, and menu buttons on the DROID RAZR, RAZR HD, and RAZR MAXX HD. So what is Motorola planning here? It is expected that the Verizon DROID devices will arrive with capacitive touch hardware buttons, while the Moto X will feature on-screen ones.

So, are you excited about the new phones which are going to arrive on Big Red? Leave your thoughts in the comments below. In the meantime, we will be digging in to bring you more about the upcoming handsets.