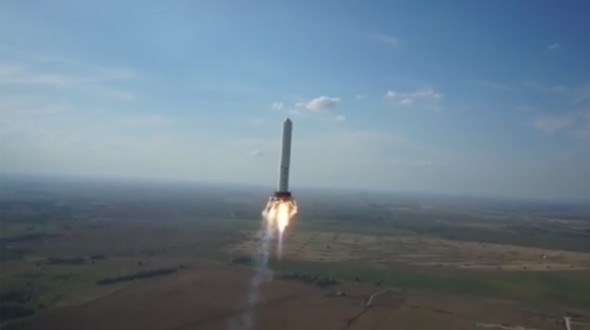 Conventional space rockets operate in multiple stages that separate during the liftoff sequence, meaning that they can only really be used once. The Grasshopper rocket being tested by SpaceX is entirely different, because they want it to be the future of reusable spacecraft.

Up until now, SpaceX has been using the Falcon 9 rocket to get its Dragon capsule above the clouds and into orbit, but it did that multiple stage thing. With the Grasshopper, it stays together for a control ascent and then it can actually be refueled and reset for another launch in as little as 24 hours.

The other thing that makes the Grasshopper so neat? It does a completely vertical takeoff, sure, but it also does a completely vertical landing too. That’s why they call it a VTVL (vertical takeoff, vertical landing) rocket. You can see this being demonstrated in the video below where the Grasshopper blasts off, reaches a height of 325 meters (1066 feet), hovers in mid-air for a few seconds, and then slowly descends straight back down in a controlled vertical landing. I sure you can imagine just how hard it is to keep something like the perfectly vertical.

This isn’t quite high enough to rendezvous with the International Space Station, but it is an improvement over the 250 meters it achieved in April. You could say that SpaceX is improving the Grasshopper’s performance in leaps and bounds.