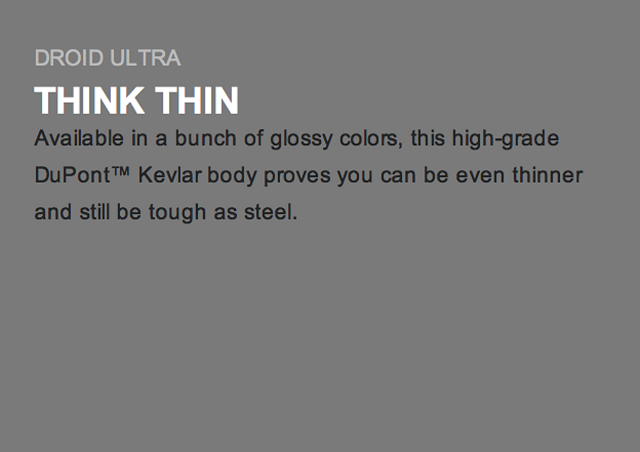 We have been hearing rumors about Motorola’s deal with Verizon to release new DROID handsets, and now Motorola’s US site appears to have confirmed that they have been working on a DROID Ultra device. But not much info is available regarding the upcoming device. It’s just a teaser asking us to “Think Thin”. We also learn that the DROID Ultra will be coming equipped with a “DuPont Kevlar body” and will be available in a “bunch of glossy colors”.

Just in case you don’t know, Motorola has used Kevlar in the past with the RAZR M, RAZR HD and MAXX HD. The material is a high strength synthetic fibre, which has many applications such as in the manufacture of body armor. The website is also showing specs, but those belong to the RAZR M (so that’s probably just template copy and paste) which came out last year. But it probably won’t take too long for the DROID Ultra’s real specs to come out, maybe through a leak.

It’s nice to know that Motorola is working on phones other than their much anticipated Moto X. But we are not sure whether or not the DROID Ultra will be ‘contextually aware’. We are digging in to find out more about the device, so stay tuned for updates.