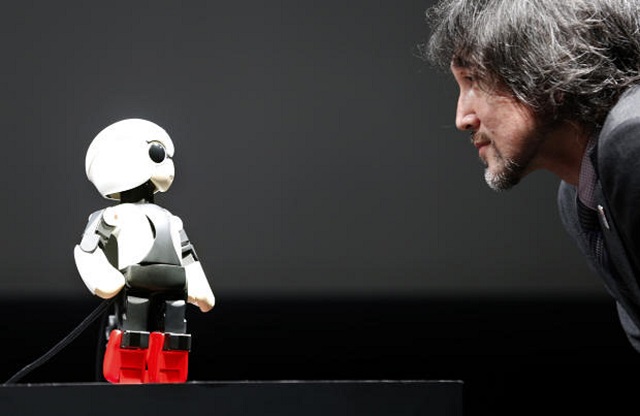 The thing that sets the robot that you see above apart from other robots is not that it can run very fast or have a sense of touch nor is extremely cute, but it is going to be the first robot in space which will communicate with humans. Developed as part of the Kibo Robot Project, this 13-inch tall humanoid named Kirobo (In Japanese “Kibo” means hope) is going to talk with Koichi Wakata on the International Space Station.

Kirobo, which has not been designed to do physical tasks, weighs only a kilogram. It is black-and-white having red boots, and has a small red mouth with large oval eyes. The robot, with a video camera, voice and facial recognition, and natural language processing, will be launched from the Tanegashima Space Center on August 4th, and it will be the first talking robot aboard the ISS. Kirobo, which speaks only Japanese, will be chatting with Wakata who is going to be the first Japanese astronaut to command the station.

Tomotaka Takahashi, CEO of Robo Garage and associate professor at the University of Tokyo, says, “When people think of robots in outer space, they tend to seek ones that do things physically. But I think there is something that could come from focusing on humanoid robots that focus on communication”.

And Kirobo is not the only robot developed as part of the project. Kirobo’s counterpart, Mirata, will be on Earth for troubleshooting.

The Kibo Robot Project includes Dentsu, the Research for Advanced Science and Technology, the University of Tokyo, Robo Garage and Toyota, and cooperation with the Japanese Aerospace Exploration Agency.