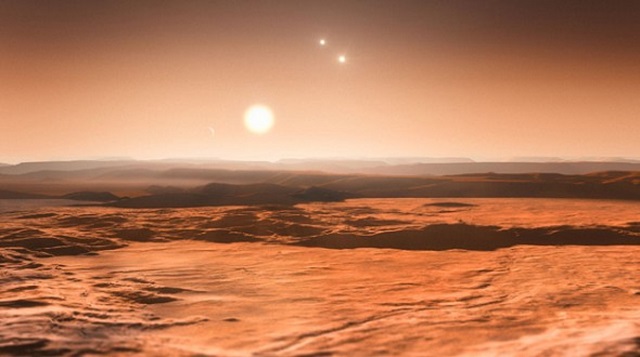 We saw the Kepler 62-f earlier. While that planet is orbiting a star which is 1,200 light years away from our planet, there’s a triple star system known as Gliese 667 just 22 light years away. What really has us excited is three so-called super Earths have been discovered in the habitable zone of Gliese 667C.

The discovery was made by astronomers who were checking out data from the European Southern Observatory’s (ESO) Very Large Telescope (VLT) in Chile.

The new planets are believed to be large rocky planets way bigger than Earth, but not as massive as planets like Jupiter. The gravity of the planets would be higher than ours, but being in the habitable zone means that there could be liquid water on the surface of these planets. Gliese 667C’s habitable zone is closer to the star, as it measures only about a third the size of our sun.

If we were on any of these planets, the Gliese system’s two other stars would be seen as very bright stars during day time, and would be as bright as a full moon on Earth in the night.

A High Accuracy Radial velocity Planet Searcher (HARPS) was the instrument that was used to make observations. It measures radial-velocity, a doppler shift in a star’s light caused when an orbiting planet produces changes in position and velocity of the star.

So, if there is water on those planets it increases the possibility of the presence of some form of life. Aren’t all these discoveries interesting? What are your thoughts on life on other planets?