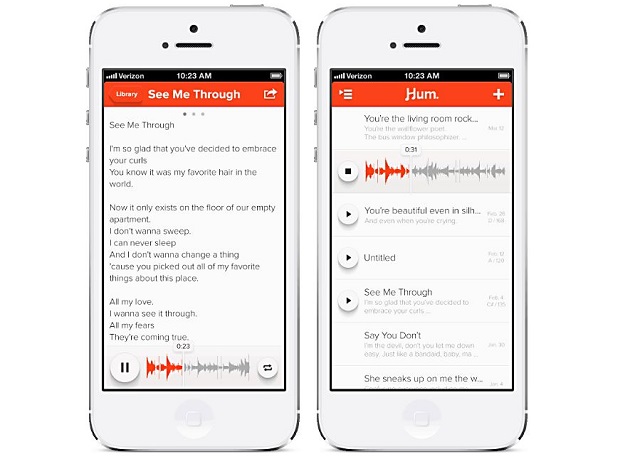 There are tons of different notetaking apps available for iOS devices, but most of them aim to be all things to all people. Whether you use the iPhone’s Notes tool, Evernote, Google Keep or whatever other solution, none of them are particularly purpose built for the budding professional musician. A new app is being developed for the iPhone that is geared specifically for songwriters. It’s called Hum and they’re currently seeking some crowdsourced funding through Kickstarter.

Hum’s developers promise that the app will keep users “in time, in tune and in sync,” working as a musically-inclined combination of the Notes tool and the iPhone’s Voice Memo tool. What’s different here is that you can start with an audio recording (maybe you strum together a short melody on your guitar) and then you want to tack on your written lyrics afterward. You can do that and you can work in reverse, too. What’s interesting is that your song in progress can then be trimmed, tuned or timed too.

You get your lyrics, recordings and tuner all in one place. Everything is properly sorted and organized by song, so that your voice memos don’t get lost in the mix and they can be properly paired up with the lyrics that you’re writing. You can apply mood-based metadata and assign a root note to your recordings. There’s even a built-in metronome to keep you on time.

The Kickstarter campaign launched earlier this week with a $20,000 goal. As of this writing, they’re at a little over $5,000 with one month to go. A minimum pledge of $6 nets you the app as soon as it launches in October.