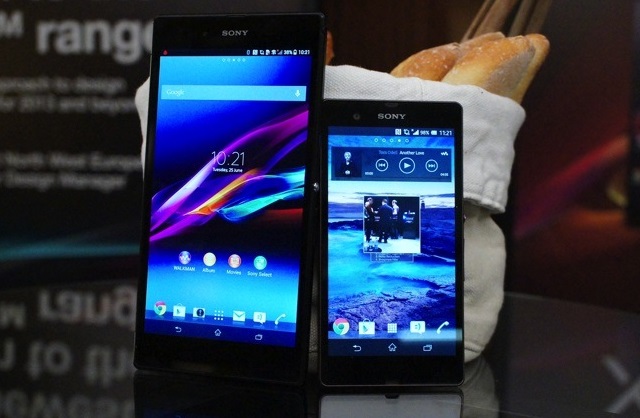 We knew it was coming, and it’s now here. The Sony Xperia Z Ultra phablet is now official.

The Xperia Z Ultra has been designed beautifully and, as you can see in the image above, the 6.4 inch Android 4.2 device dwarfs the company’s flagship Xperia Z. The good news is that this doesn’t mean that it’s too big to fit into your pockets, it’s just 6.5mm thin. In comparison the Xperia Z measures in at 7.9 mm.

The Z Ultra is a bit on the heavy side though, weighing in at 212g (the smaller screened Galaxy Mega 6.3 weighs 198g).

As rumored earlier, the ZU is powered by a Qualcomm Snapdragon 800 (2.2GHz quad-core processor), and although it’s big, the 1080p display appears to be pretty sharp and bright. As you will see in the video, it supports not just capacitive styluses but also graphite pencils, and it will be certainly fun writing notes on a new handwriting recognition keyboard.

On the downside, you get just an 8-megapixel cam rather than the 13-megapixel shooter on the Xperia Z. Also, there’s no flash. So, this may not be the device that shutterbugs will be interested in. The speaker position is also a bit annoying with the ZU, though that’s a pretty minor issue for most.

The device supports LTE, has 2GB of RAM, 16GB of onboard storage, and a microSD card slot. And it has a 3,000mAh battery and is water and dust proof.

The Xperia ZU will launch in Q3. Check out video to take a closer look at the device and leave your thoughts below. Are you interested in the device?