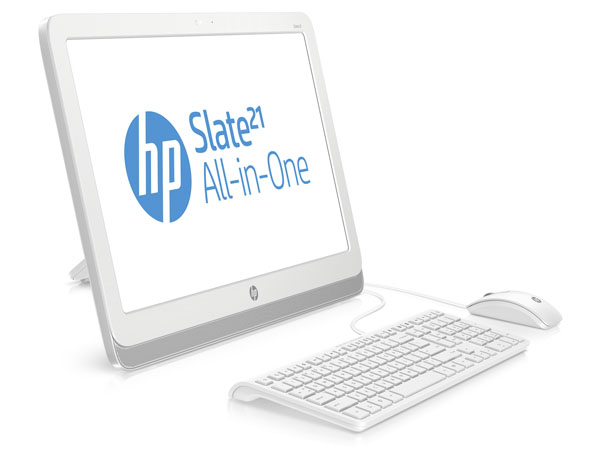 While Google has long touted its “Chrome OS” as an alternative to Windows – the platform hasn’t exactly taken off outside of a limited yet dedicated group of web-centric users. Does this mean that Microsoft can continue on in the desktop world, uncontested save for Mac OS, Linux, and the limited Chrome OS niche? You’d think so, but apparently Android is more than ready to step up to the plate and steal away some of Microsoft’s marketshare.

We’ve seen several hybrid laptop/tablet devices this year, and now comes a new desktop all-in-one from HP, the HP Slate 21 AIO. This 21.5-inch desktop computer has a touch display, Nvidia Tegra 4 processor and is powered by Android 4.2.2 Jelly Bean. For those wondering this isn’t a true tablet – meaning that there is no battery on-board and it must be powered by an outlet at all times.

So is Google ready to move on from Chrome OS and position Android as a Windows alternative? Hardly.

It’s important to note that Google is still very much dedicated to its web-focused Chrome OS platform and that any efforts to bring Android over to desktop or laptop devices have been moves by manufacturers and not directly efforts from Google.

Still, it’s hard to deny that there is a growing number of PC-like devices that are utilizing Android over Windows, Linux or Mac OS. And honestly these types of devices could be perfect for folks with limited needs: typing, emailing, checking Facebook and just general browsing of the web.

When is the Slate 21 AIO coming? The device will arrive sometime in July to Asia, with a very friendly price of $359. No word on if and when the unique desktop AIO might make its way over to Europe, North America and the rest of the globe.

What do you you think, could you see yourself replacing a traditional PC desktop with something that runs on the power of Android, or is a mobile OS just too limited for use outside of tablets and smartphones? Let us know what you think in the comments below.