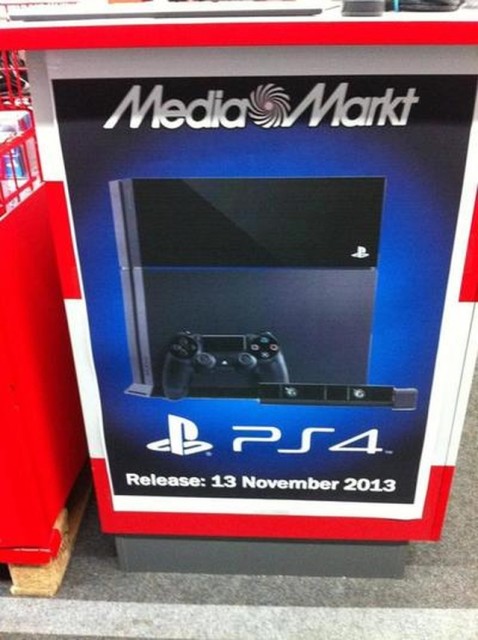 Even though Microsoft was busy doing a 180 yesterday in regards to region-locking and DRM with the upcoming Xbox One, many people are still saying that the PlayStation 4 has practically already won the “console wars” for this generation. It might still be too early to make that declaration, seeing how the next-gen consoles haven’t even launched yet, but they will be launching very soon. In the case of the PS4, it has apparently been leaked that Sony’s next-generation home video game console will be available at retail stores starting on November 13.

In general, we already knew that both the Xbox One and the PS4 would be launching in time for this year’s holiday shopping season and it seemed that November was a very likely launch window. However, up until now, we haven’t really been able to nail them down to a specific date. Some sources pointed toward November 26, whereas others said November 21. Well, it’s even sooner than that — November 13 — if this Media Markt poster is to be believed.

No, Media Markt may not be quite as large a retail outlet as a Walmart or a Best Buy, but that poster is looking pretty legitimate. That being said, this poster was spotted in Amsterdam, so it may not necessarily be reflective of the release date we get in North America. It should be around the same window, though. What’s crazy is that Amazon is already sold out of its “launch edition” PS4 pre-order units, but you can get other special packages from Amazon and from other retailers and e-tailers too.