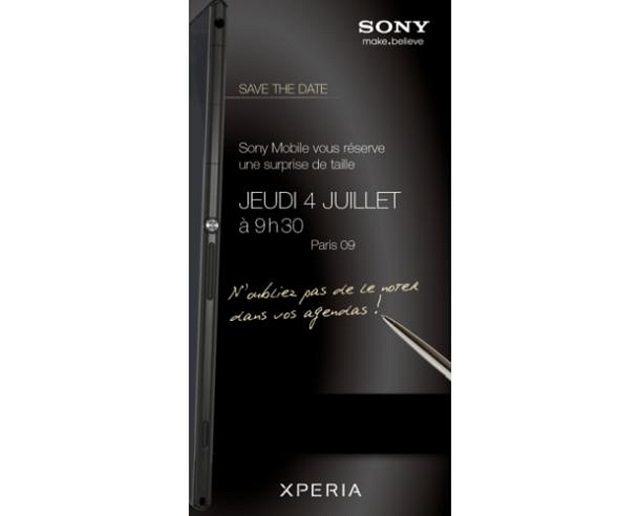 Sony has plans for a “big surprise” at an event in Paris which has been scheduled for the 4th of July. The tall and slim device that you see in the French press invite above is thought to be an upcoming phablet from the company.

Rumor suggests that the device, which is expected to be called the Sony Xperia Z Ultra (remember the Xperia ZU?), is coming equipped with a 6.4-inch screen with 1080p HD resolution (342 ppi). But what’s more exciting is that the phablet could arrive with a 2.2GHz Qualcomm Snapdragon 800 quad-core processor. So it will be one powerhouse of a device, especially compared to devices like the Galaxy S4 which feature a Snapdragon 600.

Other rumored specs include 16GB of internal storage, NFC, an 8-megapixel camera and a 1.3 megapixel front cam, 2GB RAM, and it is said to be compatible with a stylus and objects like pencils. And like the Xperia Z smartphone and tablet, the device will be dust and water resistant. It is thought to be capable of surviving immersion up to one meter for 30 minutes.

So, will you be interested in the device if it’s indeed coming? Or is that screen a tad too big?