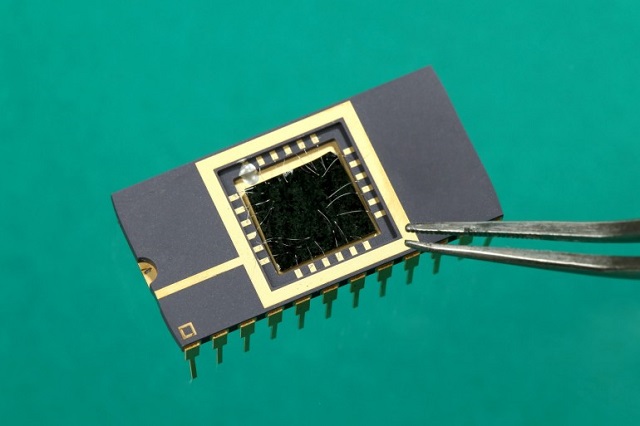 If your camera can’t take good low light images, maybe it’s time you got yourself a good DSLR which will allow you to increase the ISO, decrease the shutter speed or open up the aperture to take snaps in low light conditions. Or maybe you should wait for a cam with a molybdenite light sensor, which is being said to be five times more light-sensitive than current sensors.

In current cameras, a pixel’s semi-conducting silicon surface produces an electric charge when exposed to light. These charges are processed by the camera’s software to produce an image. An Ecole Polytechnique Fédérale de Lausanne (EPFL) team led by Prof. Andras Kis developed a sensor made of a one-atom-thick layer of molybdenite, which produces a charge when exposed to less amount of light when compared to silicon. And molybdenite is abundant and relatively inexpensive.

A pixel in the molybdenite sensor needed just one fifth the amount of light energy that was required by a silicon sensor pixel to produce a charge.

According to Kis, “Our main goal is to prove that MoS2 [molybdenum disulfide] is an ideal candidate for this kind of application. It would make it possible to take photographs using only starlight”.

We are seeing smartphone cameras becoming more impressive these days. Maybe in the very near future we will see one with a molybdenite sensor. What do you think?