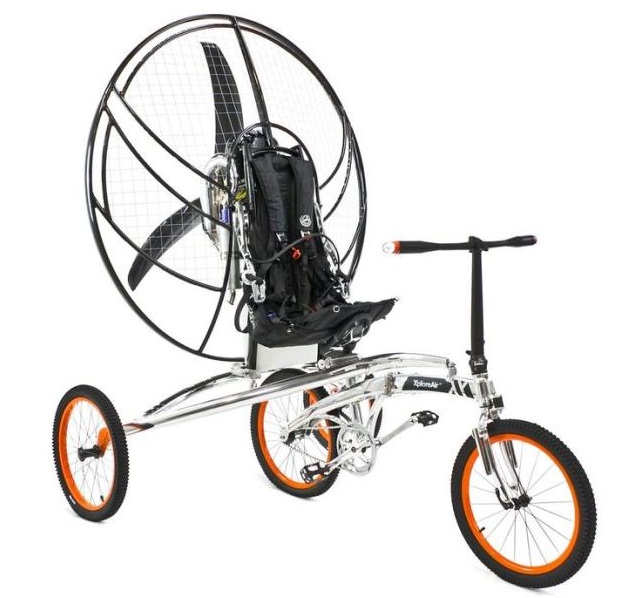 The XploreAir bicycle is designed to work as a standard bike or it can be docked to a trailer where it gets the flexibility of flight, all thanks to the power of a biofuel-powered fan. Once in the air, the bike can travel at speeds up to 25 mph for up to 3 hours, and is capable of reaching heights up to 4,000 feet.

This ‘bike’ certainly sounds amazing, but what’s the catch? Nothing, other than it doesn’t exist yet.

The XploreAir bike currently is in the development phase and its creators are hoping to take the project to the next level: actual production. To get there, the British startup is turning to Kickstarter, taking pledges which it hopes to use to get the project up and running the rest of the way.

Before you rush off to Kickstarter with dreams of getting a flying machine on-the-cheap through a simple pledge, you should be aware that the company IS NOT offering an actual XploreAir Paravelo bike as a reward for pledging. Instead, a $7,800 pledge will get you a non-flying replica of the bike and the option to buy one of the first five actual Paravelo bikes when it comes off the production line. Smaller pledges land you little goodies like a special postcard or tea mug.

Still, the idea is that your funds help make a pretty cool project take a big step forward towards being more than an idea, and instead an actual commercial item. Once the Paravelo reaches that stage, XploreAir suggests purchase and operating costs will be comparable to the average small family car. So in other words, it’s not exactly a cheap mode of recreational transportation.

Anyhow, head over to the project’s Kickstarter page to learn more. What do you think of the idea? Share your thoughts below.