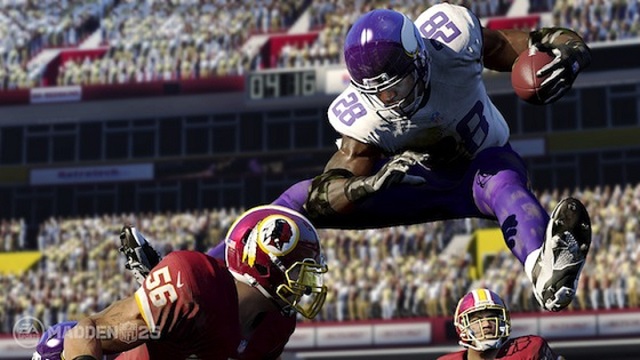 Games might become frighteningly real sometime in the future. But it seems that sports games have already become more realistic and fun. Electronic Arts showed off the future of sports games inside Ignite Lab, where fans got their first look at FIFA 14, Madden NFL 25, NBA Live 14, and UFC 14.

The games, which will be coming to the Microsoft Xbox One and Sony PlayStation 4, are said to be as real as how gamers have wanted sports games to be, all thanks to the capabilities of the newly unveiled consoles. They are talking about more than 1,000 animations for a player’s movements in the basketball court with balls that finally move in the right way, tackles that feel very real, more impressive and immersive crowds, stunning graphics, and players capable of making decisions and reacting as human beings would do.

According to FIFA executive producer David Rutter, “What we’re now doing is looking into the future. What makes a human move is anticipation. So now, if I run toward you, you’re going to know I’m coming. You can anticipate that, and you can react. Players in our game now have the horsepower to do this. When we started to introduce runtime [on the PS2], you ended up with these very believable outcomes, but while the collision would look beautiful, the behavior was dumb, because they’re not actually thinking about how to do that. Now, what we can do is actually have them not falling. So you’ll see lots of skips, lots of nuance in their behavior that for a human, is what you learned growing up, but we never had that before in our game“.

NBA Live Creative Director Gary Patterson says, “The ball was hard-coded into the dribbling animation, so when the animation changes, the ball does funny things. It goes around the floor, or you get a double-bounce, or it gets stuck to their hand for an inordinate amount of time. Now, we’ve released the ball to physics… it works the same way dribbling works in real life“.

Are you excited about these sports games that are arriving on the new consoles?