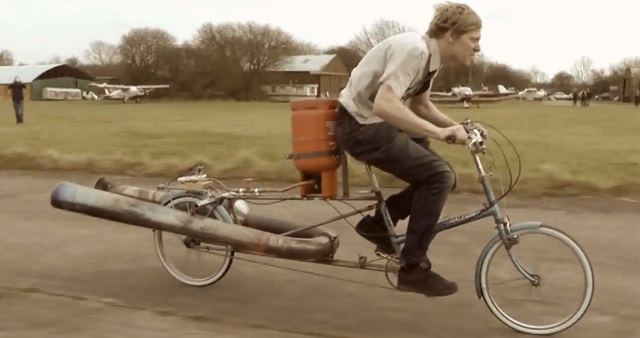 Not too long ago Colin Furze decided it was a good idea to create a baby carriage that could go up to 50mph. Now he has decided to take a similar approach to an old bike.

The idea of a bike going 50mph isn’t technically crazy – I mean, there are motorcycles after all. But as you watch the bike in the video, it clearly wasn’t meant for this. This old bike’s wheels basically go to crap under the pressure of the jet-powered engine.

According to Furze, it would have been possible to push the speeds even higher, but due to the bad wheels and the total imbalance of the bike, it would be almost impossible to stay on the bike if he brought the speed up any more.

For those that would really love to make their own pulse jet for projects along this like, Furze also has a video that shows how that’s done. Of course it takes some technical know-how and isn’t for everyone.

What do you think of the pulse jet bike, any other interesting ideas for pulse jet use that can think up? Share your thoughts below.