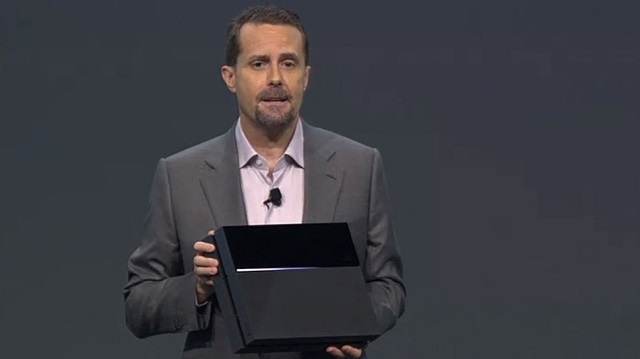 It was announced back in February, and now Sony has unveiled their PlayStation 4 gaming console at E3. It’s coming “this holiday season” and is currently available on pre-order.

The device is coming with an X86 processor, enhanced PC GPU and 8GB of memory, along with a dual-shock controller with a touchpad, headphone jack and share button which will allow you to share gameplay clips with your friends or let them take a peek at you playing a game remotely. You can even get a friend’s help to finish a tough level by allowing him to take over the controller.

As announced before, you can play PS4 games on the PlayStation Vita. But one of the best things is that Sony has announced that you can freely sell and trade disc-based single player games. Jack Tretton, president and CEO of Sony Computer Entertainment, said, “You can trade in the game, lend it to a friend, or keep it forever.” As you will see in the video below things are way easier than the rules created by Microsoft for the Xbox One.

As for the pricing, the device costs $399. If you haven’t noticed, that’s $100 less than the Xbox One. The package will include the system, a controller, USB, HDMI and power cables. The PlayStation 4 Eye, in case you haven’t heard, is a $59 add-on.

You can pre-order the device now at Amazon, GameStop and Best Buy. So, which one are you going for?