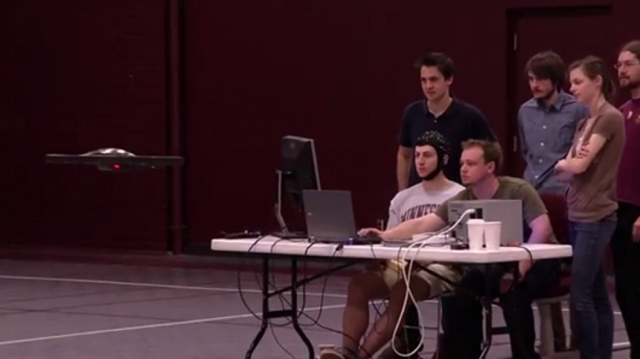 Using your thoughts to control devices is certainly something everyone might be interested to try out. A few lucky ones were allowed to be Professor X in a research done by a team from the University of Minnesota led by biomedical engineering professor Bin He. They have been testing a thought-controlled quadcopter, an AR Drone 1.0 from Parrot SA of Paris, and their ultimate aim is to develop thought-control devices that work at high speed, without any surgical implantation.

The subjects would imagine closing or opening their fists. This would be detected by an electroencephalography based skullcap Brain Computer Interface. The cap sends these signals to a computer for processing and the resulting output will be commands which will be beamed to the quadcopter’s control system through Wi-Fi.

Karl LaFleur, a senior biomedical engineering student involved in the project, says, “It’s completely noninvasive. Nobody has to have a chip implanted in their brain to pick up the neuronal activity“.

Though all this seems to be fun, they have not done this research for bringing out Christmas toys. Their goal is to help patients who are paralysed or have neurodegenerative diseases to use their thought for controlling wheelchair or other devices.

Bin He says, “Our study shows that for the first time, humans are able to control the flight of flying robots using just their thoughts sensed from a non-invasive skull cap. It works as good as invasive techniques used in the past”.

“We envision that they’ll use this technology to control wheelchairs, artificial limbs or other devices. Our next step is to use the mapping and engineering technology we’ve developed to help disabled patients interact with the world. It may even help patients with conditions like autism or Alzheimer’s disease or help stroke victims recover. We’re now studying some stroke patients to see if it’ll help rewire brain circuits to bypass damaged areas”.