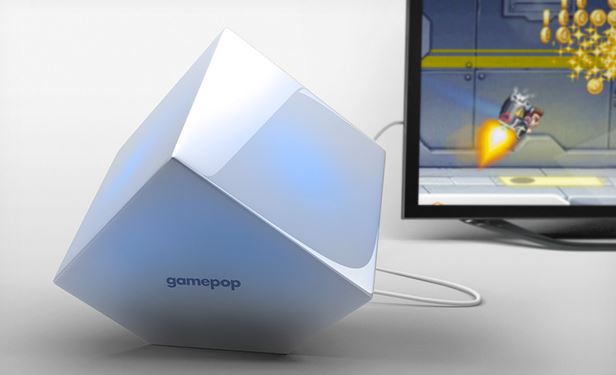 You might already be familiar with how Bluestacks allows you to run Android apps on your Windows PC and your Mac, but the company is also working on an Ouya competitor for your TV that runs on Android. What makes the Bluestacks GamePop even more unique than other similar TV gaming boxes is that this Android-based device can also handle iOS games.

It’s doing this through something called Looking Glass, which works at the API level. “It’s not quite virtualization or emulation as you’ve known it,” says company CEO Rosen Sharma. “We recreate the API that iOS provides, but we don’t use any Apple bits to do it. So we skip iOS altogether.”

What this means is that when an app developer submits their iOS game to Bluestacks, the game will run as if the GamePop was running iOS. But it’s not, because GamePop is still totally based on Android and will continue to support Android games. They’re trying to make it as easy as possible for developers to port over titles, because they don’t have to recode their games; they just have to “change their payments backend so it works with our subscription model.”

That’s the other big difference that makes GamePop unique. Whereas Ouya will sell you individual games like how you’d expect from the Google Play Store, Bluestacks is taking a Netflix-style subscription model for GamePop. You pay $6.99 a month to play as many games as you want. And they’ve already got several heavy hitters on board, including Glu, Halfbrick, Jawfish Games, Gameloft and Fieldrunners maker Subatomic Studios.

There’s still a lot more to learn about GamePop. They’re not being specific about hardware, for example, but we hear that Intel, Qualcomm and AMD are involved. We also don’t know about the controller, but we hear they’re shooting for launch this winter. What’s more, if you sign up for the pre-order before the end of June, you’ll get the GamePop for free as long as you agree to subscribe for one year. After that, it’s $129. Extra controllers will be $20, but you can use your Android or iOS device via the planned app.