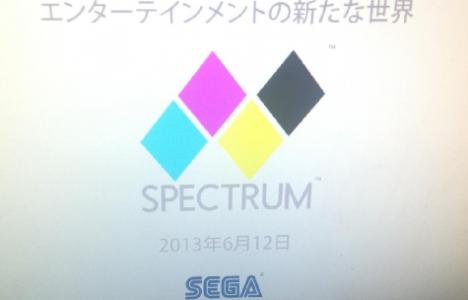 This just in from crazy-town, the rumor mill is spitting out one of the most insane rumors I’ve heard in a long while: Sega is returning to the hardware business with a new console.

While I have a special place in my heart for consoles like the Dreamcast, this is absolutely a silly idea. Sega isn’t exactly swimming in dough, and the gaming/entertainment business is more aggressive than every before.

So what sparked this rumor? Apparently an image has been floating around the net (as seen above) with the word Spectrum and a Japanese headline for the image that says something along the lines of “A new world of entertainment”. It also mentions June 12th, which is right in the middle of E3.

The reality is that Spectrum could be anything, really. First, it could be totally faked image. Second, it could be some kind of digital distribution service, sort of like Steam. Less likely, it could also be hardware.

Honestly, I find it nearly impossible to believe this would be a full-fledged console. Could it be an entertainment device similar to the OUYA or even Google TV? Where it runs a lot of cool indie games, retro Sega games and a few newer Sega arcade games – as well as other entertainment apps? It’s possible, but even that seems like a damn big stretch.

Ultimately, I think that the whole Spectrum thing will play out as “Nothing to be excited over”. Again, I don’t have any insider knowledge or physic powers, so I’m just speculating, but really – would it make even a tiny bit of sense for Sega to return to hardware at a time when mobile devices are starting to eat into the traditional gaming market’s sales? I certainly don’t think so, but what do you think?